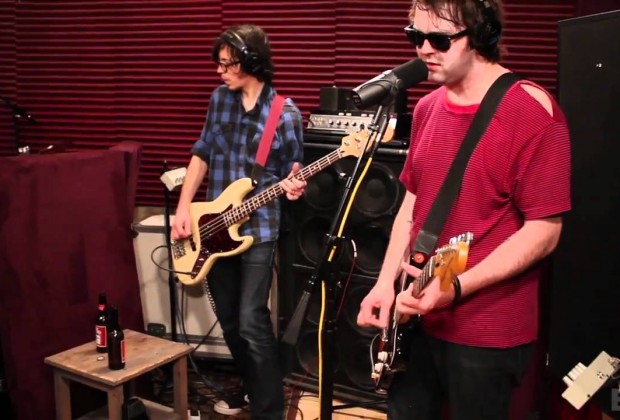 The beginning of a new year always brings a lot of activity and excitement to the music industry. Fans, bands and industry folks are getting ready for South by Southwest, The Coachella Valley Music and Arts Annual Festival makes its anticipated lineup announcement and artists from around the world release their latest music. The Library is on Fire is one of those bands whose Works On Paper is scheduled for a January 31st, 2012 release. I’ve been listening to the album over the past week and have decided to share a track in this edition of Making Noise.

They Don’t Know You (Like I Know You) is the sixth track on the new album and is available as a free download.

Following their critically acclaimed release of Magic Windows, Magic Nights last year, the “#1 Record of 2010” as quoted by John Sellers (SPIN Magazine, author of “Perfect From Now On: How Indie Rock Saved My Life”) and touted as one of the ten best albums of 2010 by Scottie Diablo of MTV, The Library Is On Fire is excited to announce their forthcoming LP Works on Paper out January 31, 2012.

Culminating from a studio session with famed producer Perry Margouleff (Rolling Stones, Page/Plant, Aerosmith, Brian May, Soundgarden), who took an instant liking to the band for their hard working, no-nonsense studio ethic, he invited the band back to record the album, sharing production duties with Todd Tobias (Guided By Voices, Robert Pollard) in their native Ohio where the other half was recorded during an especially brutal Winter.No strangers to artistic collaborations with some of rock n’ roll’s finest, including poetry swaps with Tom Verlaine of Television and whiskey-soaked art shows with Guided By Voices (the bands’ greatest inspiration) and support from the legendary Lou Reed on his infamous “New York Shuffle” radio show on The Loft SIRIUS and XM Channel 30 with Hal Willner, Works on Paper features a smattering of appearances including: Ian McDonald (King Crimson), Matt Mottel (Talibam!), William Whitman (Cyndi Lauper) – to name a few. The album expresses a multitude of golden moments, with Pierre DeBeauport (co-songwriter for the Rolling Stones) sharing mixing duties on track “Fly Sucka on the Score” and the guitars on “Broken Guitar” which were recorded on Scotty Moore’s (Elvis Presley) amp – the memory of “The King’s” voice through those same filters adds a touch of nostalgia to what The Library is on Fire deems to be one of their finest works yet. The three-piece is comprised of front man Steve Five on guitars/vox, Travis Tonn on bass and Pete Sustarsic (Oberhofer) on drums. Works on Paper is an ideal Autumn album that should be listened to through headphones from beginning to end. That’s the way it was intended. Like a group of paintings in the oblique setting of an art gallery, the album’s lush instrumentation and melodies burst forth from its clean, superfluous studio production. The album is at once warm and cold, like a Rothko painting, and at once disparate yet unified, like a Basquiat.