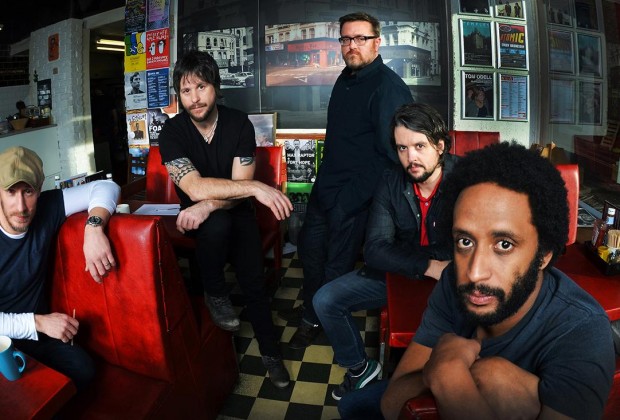 Elbow will release of their fifth studio album, build a rocket boys! in the United States on April 12th. A digital version of the album will be available March 8th to coincide with the March 7th UK release. This is the follow-up to their 2008 Mercury Prize winning release The Seldom Seen Kid.

I talked on the phone with bass player Pete Turner about the new album, winning the Mercury Prize and what it takes to keep a band together.

Congratulations on your new album, build a rocket boys! Can you tell us a bit about it and what it means to you?

Lyrically, it’s kind of an opposite approach. Usually an album documents two years or so of our lives since the previous album. This one’s a little bit different as in it’s kind of going further back to childhood. But musically, since the album The Seldom Seen Kid did really well, we didn’t want to write a load of big anthems. If we were fans of Elbow we wouldn’t want to hear that. We didn’t want to do a real left-field album either. We wanted to do something that was very honest, that was very us, that was a nice next stage. It was the most relaxed to write and, I think, the most comforting. If you asked me this a couple of years ago when The Seldom Seen Kid was doing really well, I probably would have been quite worried, but the whole experience of writing this album was loads of fun. It’s a good album to write, this one.

When I received the album, I wanted to listen to the whole thing at once but it’s rare to listen to a complete album these days. When you start out working on a new album, is it conceived as a one cohesive unit?

That’s how we approach it really. We’re fans of an album, you know, it being a body of work rather than just lots of individual songs put together to make an album. We do spend a bit of time looking at it from start to finish. It’s very important that it makes sense to listen to it like that. If you put on an album like The Sophtware Slump from Grandaddy or Ladies and Gentlemen We Are Floating in Space by Spiritualized, they’re going to be albums that you sit down and you go into that space for forty or fifty minutes. We always try to write them that way.

Elbow won the Mercury Music Album of the Year in 2008 for The Seldom Seen Kid. What impact did that have on a follow-up release?

I would have said initially that it would probably have put a lot of pressure on us to follow it up. I think that is the question that was asked the most, you know, how was it writing this one? And I would assume it would be difficult but it just wasn’t. It was a lot more fun and, for the first time, we knew that this album was going to get released. Previous albums have all had their ups and downs whilst writing them. We knew a lot more people would listen to it so it was kind of making the most of that. It was the most important album we’ve ever written in terms of that. Our label never put any pressure on us. We literally got on with it for just over a year and it was great doing it, it was fun.

Your bio mentions that you built a mini-studio at every venue while touring. Can you tell us about the gear and how having a studio on the road influenced the songwriting?

It was really just a Pro Tools rig, basically a laptop and an mBox. We’d all turn up into the dressing rooms and you’d have a drum-kit, a bass amp, and a guitar amp. The idea was just to get barebones of songs so that when we finished on the road we’d have a few ideas that we could start with.

How much of the album was recorded on the road?

I think the majority of “Dear Friends” was written in dressing rooms but that was kind of it. We had lots of ideas but then it was quite a difficult thing sometimes because of your headspace. You’re not always in a writing mood when you’re on tour. So it’s kind of like getting a balance.

After that, you went back to Blueprint Studios where you recorded your previous two albums. It’s often referred to as the band’s spiritual home. What makes it that way?

Well the nice thing about it is, to travel there everyday, it’s five minutes to the center of town for me. And when you’ve been away, we’ve probably been touring for about 18 months, it’s important when we get home to do it in Manchester because of family life. I’m here now and hear some jostling around but you do have a nice view of the city center. Tonight is quite a nice red sunset. I think Manchester, which we love and it’s where we came from, is the best spot for us actually. We were asked if we ever thought about maybe recording in LA or somewhere but it just wouldn’t fit out music so we have to comeback to Blueprint. It’s kind of like going to the office everyday for us.

Elbow’s keyboard player Craig Potter produced this album. He also produced your previous release. How does having a band member producing influence your recordings?

Craig has really honed his practice. For us it makes a lot of sense because sometimes we feel that producers are working on behalf of the record label and they may want to do certain songs down a more commercial route because they see a single. The most important thing for us is the finished final album. We might steer the odd song saying it could be a single but Craig, although he is a producer, he’s first a member of the band. His worries are the same as our worries. We’re very lucky that Craig took the time to learn Pro Tools and, as a producer, he’s great.

It looks like you have a show at Coachella and then will be touring the UK. Do you enjoy touring?

We love it. Absolutely love it. We always say that doubt and no-doubt is the first person on the tour bus and its true. I’m kind of experiencing that at the moment. You have your family duties and your real life at home then you get to go away and be teenagers again for 18 months and hang out with your friends. You can just have a lot of fun. By the time that’s over, you’re really ready to get back into the studio again. Get back on with normal life. The two sides are just fantastic. It’s a pretty lucky thing to have really. It’s kind of like reaping the rewards of the hard work of writing and thinking constantly about how the album is going to sound.

When you’re writing and recording, do you think about how the songs will translate into a live environment?

We never really have in the past. This time it was difficult because we knew we were going to play big arenas on this tour. It was in the back of your mind, but first and foremost, it’s really what the song needs before all that. On this album “Open Arms” is one where we kind of had that in mind. When we were talking about it I was trying to explain about the chorus, a real repetitive beat pounding at the same time and I found myself talking about light shows and how the lights would be going. It’s definitely in the back of your mind but we need to think about making the album the best album it could be.

Elbow released its first EP Noisebox in 1998 but you’ve been playing together since 1990.  What are the keys to keeping a band together for so long?

There’s only one really. We’ve always had this gang mentality. We’re really good friends first and foremost. That’s the most important thing. I always find it sad when the band that you love decides to go their separate ways. That’s a real shame. We all find the same things funny, we have a laugh and we enjoy each other’s company. And we know how lucky we are to be doing what we’re doing. When you’re away on tour, you have to be aware of people’s feelings. Maybe sometimes people need their space. We kind of know how after years of doing it. I feel like if I wasn’t doing this in Elbow, I’m not sure I would be doing it. I just don’t think I’d enjoy it as much with others.

Can you give any advice to bands and musicians just starting out today?

The thing that I always feel is the most important is to write the music that you would want to hear. In the past, before we were Elbow, we were a band called Soft and we were writing what we thought the record industry wanted to hear so that we could get a deal to record albums. Until we actually started writing the music that we wanted to write, that we were passionate about, nothing ever happened. I also think bands these days can get their music around. Lot’s of bands are able to get records out now. For us that’s very important. We’re very lucky that way. Write the music you want to write, that’s the most important thing.

Listening to the song “Lippy Kids” brought back memories of adolescence, that age of innocence, endless possibilities and big dreams. Was making this album like building your own rocket?

I think because of everything that’s happened, with the last album doing so well, we realized that if you stick with something, you can get there, you can do it. And that’s what Guy [Garvey] is saying really. It’s sort of like teenagers are all vilified and people won’t pass them on the streets because they are worried about them but it’s a great time when anything is possible. It’s a time when your life’s really starting. And he’s saying you can do anything you want. Just go for it. The thing you think is the hardest thing to get to, even if you get halfway, that’s pretty cool.

4 thoughts on “Interview with Pete Turner of Elbow”