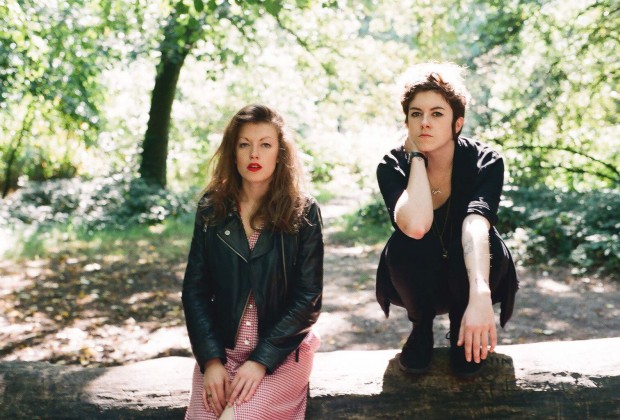 In keeping with the South by Southwest theme, over the next two weeks our Making Noise series will feature artists who are heading to Austin, Texas for the music conference. First up is 2:54, the sister team of Colette & Hannah Thurlow from London. They were just signed to Fat Possum Records and have a couple of performances in New York before heading to South by Southwest. After that, 2:54 will be in California. I hope to catch them at the Rickshaw Stop later in March as part of Popscene. Their US tour dates are posted at the bottom of this post.

2:54’s new EP will be out Monday, March 5th, 2012 on Fat Possum. Scarlet is the first track from the release and is available to stream below.

2:54 is London based sisters Colette & Hannah Thurlow. Casting their spell over critics and audiences alike last fall with the European release of their Scarlet EP, 2:54 make music both beautiful and bewitching.

Today, 2:54 are elated to share both new single “You’re Early” & Scarlet EP with American audiences and announce their signing in the United States with Fat Possum.

The band will continue their US takeover this March for their first US tour, splicing an explosive stint down at South By Southwest with both East and West coast stops along the way.

On Monday night on BBC Radio1, Zane Lowe premiered their latest single, “You’re Early” a tightly coiled spring of primal energy, hypnotic melody and hushed obsession. While the track showcases their signature unique melding of rock and punk influences, it also reveals an entrancing and groove-driven side to the band that lends itself to the darker side of r’n’b. The track received it’s web premiere via Pitchfork last week, igniting an online flurry of plaudits, including  Stereogum, Fader, and Q Magazine’s ‘Track of the Day’.

For the B-side, avowed fans and fellow journeymen Wild Beasts tackle the remix – the band’s first and only reworking since notoriously taking on Lady Gaga’s “You and I” last year. The results for “You’re Early” are as strikingly beautiful as you might expect.

After their US tour, 2:54 will return to the UK this April, touring with Los Angeles doom-folk princess Chelsea Wolfe and UK dreamers, Deaf Club. The band have also announced their biggest ever headline show to date at London’s legendary Scala venue on June 7th.