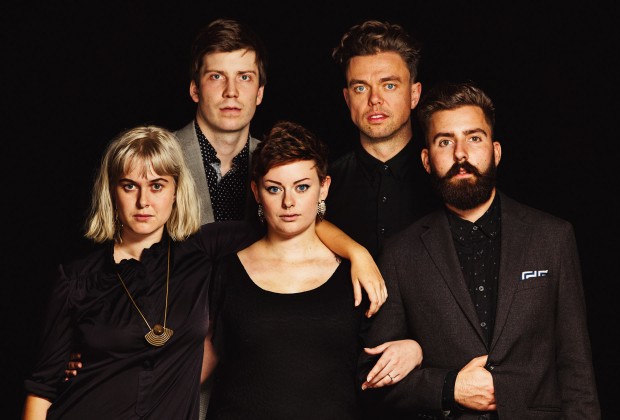 Over the past few weeks I’ve been posting videos that I shot at AES. I was also out of town for the Thanksgiving holiday. During that time a lot of new music has come across my desk. I hope to share more in the coming weeks. One band that jumped out at me is Rah Rah and their new release The Poet’s Dead. This new ten song effort effectively captures a band at the peak of their abilities doing what they do best. They are now out on tour and will be in San Francisco at Thee Parkside this Friday, November 30th.

Rah Rah’s latest album The Poet Dead was released in October on Hidden Pony Records. Art and a Wife is the first track from the album and is available to stream below.

“Their set was full of upbeat indie pop songs culminating in pretty huge choruses, which often brought to mind I’m From Barcelona (if they had like, 23 less members). The members did a lot of instrument switching and almost everyone in the band sang lead on at least one song. And just in case their catchy songs weren’t enough, their stage antics are sure to be remembered” – Brooklyn Vegan (NYC Show Review)

“Their music will completely set you on fire if you’re a fan of Arcade Fire, The Mekons, The Pixies and The Decemberists. With eclectic instrumentation, strong, anthemic guitar based melodies and harmonies that are sure to sweep you in with their energy, Rah Rah are one of the best new Canadian indie-rock band you’ll discover this year.” – Bruce Warren, WXPN

“All six band mates displayed considerable musical chops, and there was something awe-inspiring about watching all of them swap positions and instruments in some inspired onstage version of musical chairs. Regardless of who was playing, all six clearly have a knack for well-crafted indie-pop, pairing clever lyrics and truly pretty harmonies with enough shimmering guitars to earn them comparisons to Broken Social Scene.” – CBC.ca (NXNE Review)