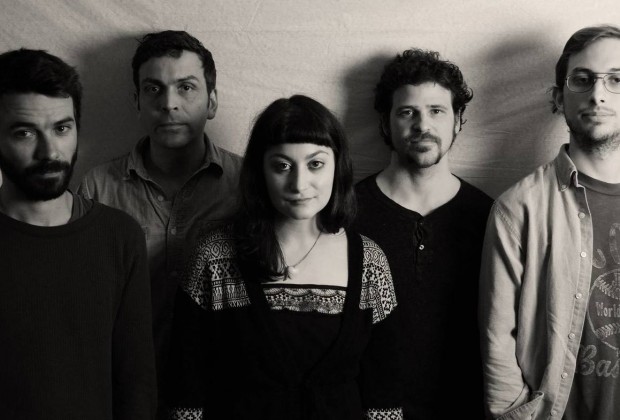 Summer is in full swing and while a number of people are on vacation or holiday, new music keeps pouring in. After receiving an email describing the Bar Harbor, Maine based Coke Weed as Galaxie 500-esque, I had to take a listen. Renowned for their dual girl and boy lead singers, twinning electric guitars and mesmerizing rhythm section, Coke Weed always had an early fascination with the post-hippie acid fall-out more so than the summer of love.

Anklet is the third track from their upcoming album “Back to Soft” which will be released July 23rd. You can stream or download the track below:

The Mt. Desert Island recording sessions that form the core of Coke Weed’s upcoming 3rd LP, 2013’s Back To Soft, saw the psych rock quintet definitively moving past the vestiges of the folk rock sound that marked their earlier recordings, and toward a leaner electrified sound.  It was a case of form following content as the band found their stride in the hypnotic grooves that would carry the lyrical themes of Back To Soft:  Ten songs dealing with the dangerous allure of American Bohemia viewed through a haze of nostalgia for 1990s New York City.

It was an inevitable progression for the Bar Harbor, Maine based band. Renowned for their dual girl and boy lead singers, twinning electric guitars and mesmerizing rhythm section, Coke Weed’s early fascination with hippies had more to do with the acid fall-out than the summer of love.  Perhaps the casual listener couldn’t feel the menace lurking underneath the warmth of their amps and the breathless, enigmatic voice of Nina D.  But Coke Weed has always aligned itself with the rebel streak that took root with the Stones, flowered on the West Coast with the Airplane, flirted with squares through the pop moves of Lee Hazlewood and Francoise Hardy, and eventually bottomed out in New York City with Royal Trux and the bummer spirit of ‘93.

Coke Weed is lead by songwriter Milan McAlevey, who in 1999 formed the Lil’ Fighters with Walter Martin, later of Walkmen fame.  After recording several albums at the Walkmen’s original Marcata Recording Studio in Harlem, he left the Fighters and New York for the wilds of Maine.  First impressions of the Pine Tree State lead to 2008’s Mac St. Michael LP, an album written by McAlevey and produced by Walter Martin.  Recorded in New York, the album was released under the guise of folk-balladeer alter-ego, Mac St. Michael.

In the years spent bouncing between Maine and New York, Milan teamed up with chanteuse Nina D. and the pair arrived in Bar Harbor, a quintessential New England island tourist town and an unlikely place to start a band.  First Nina and Milan found a kindred spirit in guitarist Caleb Davis and asked him to join.  Drummer Peter Cuffari and bassist Zach Soares quickly followed suit to complete the quintet.

The group established a studio in a barn at Chickadee Hill, a flower farm in the heart of Mt. Desert Island. Coke Weed’s first album, Volume One, was recorded on two Tascam 484 cassette recorders. The band gave it away for free on their web site in 2011 and early adapters took notice.  A second album, Nice Dreams, quickly took form when the band enlisted producer Nick Stumpf (Caveman, French Kicks) to record completely live in ten days.  Nice Dreams was released in April 2012 and Coke Weed completed two national tours that year where they shared stages with the likes of the Walkmen, Woods and Vetiver.

The process of making Back To Soft was a direct reaction to the off-the-cuff feel of the previous album.  Nine months in the making and every overdub lovingly labored over, Coke Weed’s new album Back To Soft is rock music that holds a mirror to 2013 and refracts its moment through a stoned remembrance of American undergrounds past.