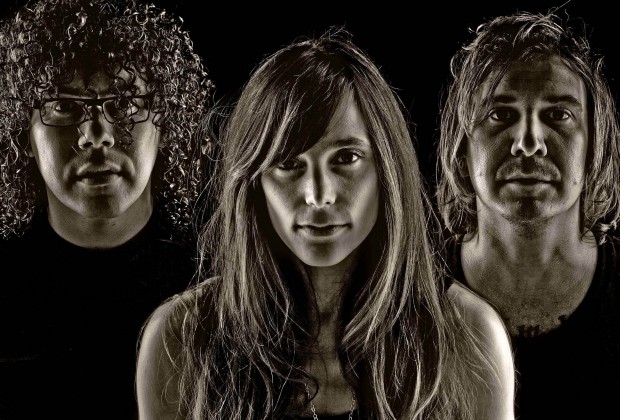 Nightmare Air is described as “possibly L.A.’s loudest band” by Scott McDonald of Surfing on Steam and, after seeing them live at South by Southwest this year, I can see why. Nightmare Air’s Dave Dupuis, a veteran of L.A. shoegazers Film School (Beggars Banquet) and Swaan Miller, whose stark 2006 acoustic album on Important Records melted hearts and faces everywhere, meticulously layer boy-girl harmonies, psych noise loops, fuzz-ripped bass, and glam soaked walls of guitars. With the addition of Detroit-raised heavy hitter Jimmy Lucido on drums, Nightmare Air puts on a live show that’s charged with energy, excitement, and decibels.

Icy Daggers is the second track from Nightmare Air’s latest LP “High in the Lasers” released on Saint Marie Records. You can stream or download the track below:

In their many combined years of touring, these road veterans have supported heavyweights from Smashing Pumpkins to The Jesus and Mary Chain, Swervedriver to TV on the Radio. In 2012 Nightmare Air embarked on an ambitious 4 month tour across the US, UK and Europe supporting the lead track for the debut album. Headlining clubs and playing festivals throughout 2012, Nightmare Air have shared stages with Sonic Youth legend Lee Ranaldo, The Wedding Present, The Duke Spirit, The Buzzcocks, Fishbone, and The Cult at their SXSW 2012 showcase.

Mixed by Dave Schiffman (Nine Inch Nails, Black Rebel Motorcycle Club, The Mars Volta, Dead Meadow) with mastering by Howie Weinberg (Nirvana, Sonic Youth, The White Stripes), the album has gotten its first kick of momentum — landing the track “Escape” on an Under the Radar Magazine 2012 Sampler, as well as Top 10 lists of 2012 in blogs and college radio.

Nightmare Air’s journey began in 2010, touring North America on the heels of their debut EP — headlining four nights of Toronto’s Canadian Music Week, earning spins on the BBC and holding a Top 10 on KEXP.