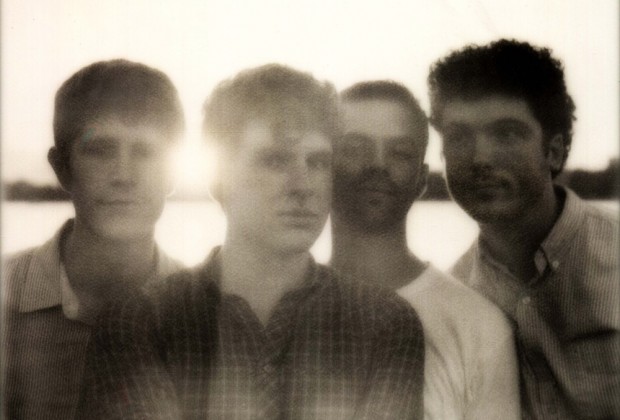 I first heard Art Decade when I was preparing my South by Southwest panel proposal Apps & Ideas: Create and Promote Music on an iPad. The band, along with director Whitney Alexander and animator Kipp Jarden, used the Procreate app on the iPad to sketch out the Western Sunrise video from their first album of the same name. Now Art Decade is ready to release their self-titled follow up on October 1st. We asked Ben Talmi of Art Decade a few questions about the band and the upcoming release. We also have a track from the new album.

Described as a pure pop song with enormous orchestral flourishes, “No One’s Waiting” has indelible melodies and cinematic string arrangements that will remind listeners of artists like Electric Light Orchestra, Jon Brion, and Grizzly Bear. Download or stream “No One’s Waiting” and read the interview below.

Congratulations on your new release. This is the second full-length album for Art Decade. How do you see this fitting in with your other work and what does it mean for the progression of the band?

The new album is a direct reaction to the last. Looking back on Western Sunrise it feels too laminated and processed. This time through we went into everything with the intent of every sound and idea being as organic as possible. The concept of everything being organic mirrors where we are at as a band, everything is coming from us, there is really no outside help.

Can you give us a little background on the writing of this album?

The writing started directly after the release of Western Sunrise. There was a very long gap between when it was recorded and when it was released. That time of reflection made me really reject that old writing style and take a different approach to everything. I generally brought in Ideas and had the rest of the band flesh them out into the finished songs. This was also the first recording with Jamie Walters and Joe Harrison, when it comes to producing records, those two have Dad vision, they get rid of all that funny business.

Every step of the recording was done entirely ourselves aside from mixing. We went into Q Division studios in Boston with our friend Matt Cozzi as an engineer to get drums done which Jamie did the entire album in one day. The rest we recorded on our mobile recording rig at apartments and friends and families houses. We also did a large orchestral session at Futura studios in Boston which might have the most beautiful live room I have ever seen. It literally has angels painted on the ceiling. The album was mixed by Anthony Rocky Gallo in Brooklyn. He is a TRUE badass, really knows how to bring the girth in the mix.

With this record everything had to be 100% planned out before we stepped foot into a studio because if we were paying for studio time it was coming directly out of our pockets. Having endless studio time can be a double edged sword, if you don’t have things planned out your song can go to shit but at the same time you may never get to that golden point if you never went to that space through improvisation.

You use a lot of orchestration on both of your albums. What are the challenges for incorporating these parts?

I have always been really passionate about the world of orchestration. My goal has always been to make records on the level of George Martin, Jeff Lynn, Jon Brion, Sufjan Stevens and all the greats who really mastered the hybrid of orchestra + band. The ensemble was 12 string players and 3 brass, the challenge was really in the writing, how to balance such a huge ensemble and a rock band and not sound overly symphonic, we are not like trans siberian orchestra!

I first heard about Art Decade when I discovered your video for Western Sunrise. Director Whitney Alexander and animator Kipp Jarden did a fantastic job on it. Do you plan on more videos of that caliber?

We actually have another video in the works with Kipp Jarden right now.  I’d love to make a movie like that Daft Punk movie Interstella 555. Just waiting on Wes Anderson to answer my calls.

Your new album comes out on October 1st. What can we expect from Art Decade after that?

Videos, touring, I want to do a lot of performances in strange places.

I love you Mom, Dad, Dan, Pen and David Bowie.