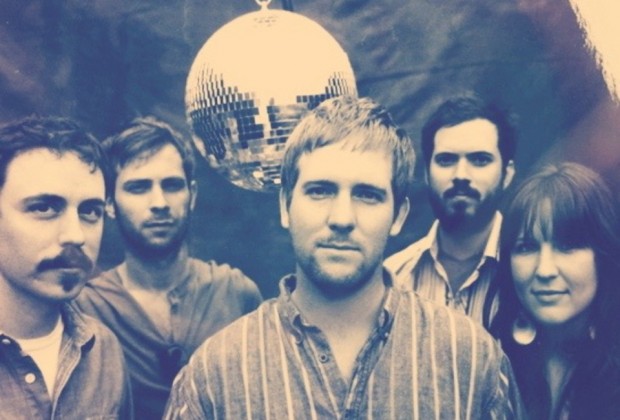 After previewing Black Books new self-titled release and watching some of their videos, I wanted to see if someone from the band could do an interview via email. Much to my surprise the whole band responded to my questions. Black Books are Kevin Butler – guitar, recording engineer, producer, Clark Curtis – keys,  artist, Meg Gilfillan – keys , vocals, Ross Gilfillan – drums, lead vocals, and Mike Parker – bass. Below, the Austin, TX based band talks about writing and recording the new album, making music videos, and opening for the Flaming Lips.

Paradise is a track from Black Books’ self-titled full-length which is out now on Believe Recordings. You can stream or download the track below:

Congratulations on your self-titled debut album that was just released on Oct 15th. You’ve had a few other releases (Eps and 10″) as well. How do you see this new album fitting in with your other work and what does it mean for the progression of your music?

Mike: The songs on the full-length were written before and after songs that are on our other releases, so that’s a tough question. These songs were written over a span of at least two years, so you may actually hear some progression of the music within the album itself. For example, “Maria” and “Big Idea” were a couple of the first songs we wrote together, while “Paradise” and “Something to Remember” were written nearly a year-and-a-half later.

Meg: We’ve been writing “new” songs that we’re anxious to put out. I hope they’ll show some growth… we’re learning how we work and play together and the writing is getting better because of it.

Clarke: I think the new album is culmination of all we’ve worked for since we began in Ross and Meg’s bright orange garage in Manor, TX. I guess we kinda inadvertently shied away from releasing a full length for awhile, but it feels great to have finally gotten it out.

Ross: We were learning to play as a band and this is our first collection of songs. This album is statement of what we were doing the first couple years. After playing this material live for months now, we see what works and what we wish we were doing. We are already working on the next batch of songs and they are taking our sound to the next place.

Can you give us a little background on the writing of this album? Does the band collaborate or are the songs written individually?

Mike: The songwriting process if very fluid, and we don’t really put any boundaries on where to start or end. Some of the songs come from a riff or a simple idea, while others are more fleshed out before they are even brought to the band as a whole. Kevin wrote the majority of “Paradise” before bringing it to the band, and we just fleshed out our parts to turn it into what it is now.

Meg: Ross almost all of the lyrics because he has to sing them… he knows what words and phrases he can make sound good, if that makes sense.

Clarke: We all put in our 2 cents on every song. Playing together and fiddling with ideas is how most of the material is conceived in a live setting.

What about the recording of the album? Your guitarist Kevin Butler produces all of the band’s music. Do you have your own studio or did you record it elsewhere?

Mike: Kevin opened his studio, Test Tube Audio, to do the album.  It made the writing process very casual and allowed us to explore ideas within a friendly environment. I think that feeling comes through in the music.

Kevin: Yep, it was all done at my place down in South Austin.

Clarke: Kevin’s a trooper. We’ll have a long tracking session and before the end of the day he’ll have emailed rough mixes already.

Kevin: Maybe not as much for writing the core of the songs, but when it comes to nailing down vocal melodies and harmonies, the recording side really helps solidify those things, and also allows us to experiment a lot.

As a band, are you more comfortable in the studio or on the stage?

Kevin: Studio, although I’m getting there with the stage part.

Mike: Definitely in the studio. But that’s what makes playing on stage fun — you’re outside of your comfort zone. You are forced to put yourself out there in front of a crowd and let it happen.  It can be pretty exhilarating. Pretty much everyone in the band is introverted and not the least bit self-absorbed, so getting us on stage makes us get out of our shells a little bit.

Meg: Studio, for sure. Especially me, I think… but we’re all getting better about it!

Ross: I enjoy the writing and recording process. I could write and record all day everyday if it was possible.

Speaking of the stage, you opened a couple of shows for the Flaming Lips earlier this year. How did that come together and what was that experience like?

Mike: Long story short, we are signed by a great UK label, Believe Digital, and they set up a UK tour that included opening slots with the Flaming Lips. We were supposed to open for them the first two days of the tour at the Roundhouse, but Wayne Coyne had a nasty cold. Since they moved the second performance a week ahead, we ended up playing our first and last gig of the tour with the Lips. We drank with the Flaming Lips crew the final night. Those guys know how to party.

Meg: Oh man, that was amazing. Foxygen was supposed to open with us but they had they had some sort of post-SXSW meltdown and canceled their whole European tour. It was just us and one of our favorite bands in the world for our very first show outside Texas. And yeah, the crew knows how to do it… I vaguely remember swing dancing to the Dirty Dancing soundtrack.

Clarke: I had played loud shows before, but once your in a space that big and your sound fills it…. it’s a completely new experience. I feel very honored to of had that feeling.

Joe Dixon did a fabulous job on the video for your song “The Big Idea” and for me, it was one of the more thought provoking videos I’ve seen in a while. How important are videos to your music?

Mike: I love to see how an artist can translate our music into another medium. Like most songs, ours are open to interpretation, even though they may mean something in particular to me or Ross, Kevin, Clarke or Meg. I’ve heard quite a few comments on “Big Idea.” It’s really thought provoking, though we hear a lot on how it’s a tearjerker. The main actor is Joe Dixon’s father, and he does such a superb job creating this solemn character that is reliving his past.

Meg: Having music videos created for our music is one of my favorite parts of all this. We give all control to the director and just see what comes of it… it’s exciting to see what talented folks, like Joe, can do with a song.

Clarke: I think music videos are kind of weird now. Maybe we should try to get Ross on a wrecking ball for the next one.

What can we expect from Black Books now that your new album has been released?

Mike: Now that we’ve been a band for a few years, I think you’ll see us trying out new sounds and more radical ideas. We really push ourselves as songwriters. I think that will come through in the new music.

Meg: New songs with new sounds and feels. We’re excited to see what we can do with what we’ve learned the past couple of years.

Ross: We will be finishing a new batch of songs that we have been tinkering with. It is the same group with more experience and more focus – we just sound better then we did two years ago.  I cant wait to record again. Also, we will be looking to visit cities we never have played in – which is the vast majority of cities.