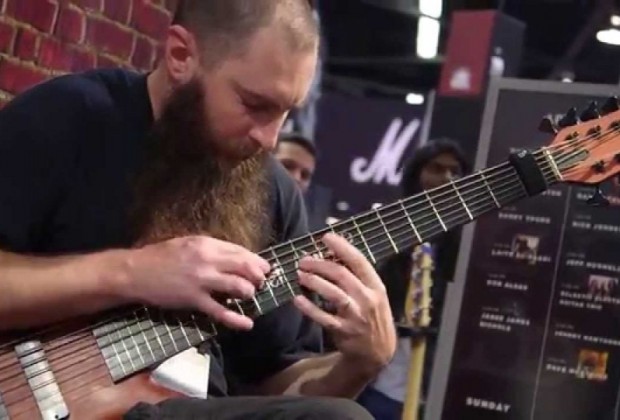 Most of the interviews on The Noise Room are usually conducted in-house however today we are doing something different. A publicist who we’ve worked with in the past sent us this interview with Jeff Hughell noting that it is public domain and we are free to publish it in its entirety. So we decided to do just that. The interview was conducted by Daniel Gonzalez who did a great job and asks many of the same questions we would. We hope you enjoy the interview below.

For 20 years, Jeff Hughell has quietly been gaining recognition as one of today’s most innovative bass players. Equipped with his custom made 7-string bass guitar, Hughell’s arsenal of technique and chops can cover a range of genres stretching from death metal to jazz. Here we sit down with Jeff to discuss his debut LP, Chaos Labyrinth, how it all started, and some future plans.

What inspired you to start playing bass and what were some of your favorite bands growing up?

The first thing that really made me want to play bass was a video of Cliff Burton playing a bass solo. He made it sound so different and had such a cool presence and style. The bands I listened to before I started playing was Metallica, Slayer, and Pantera. Another band that had great bass presence was Suicidal Tendencies. The album The Art of Rebellion came out right before I started playing and Robert Trujillo’s bass tone cut through the mix so well. It was really interesting and different.

Why did you choose the bass opposed to other instruments?

I actually started out playing guitar and after a month I tried the bass. I realized I liked the finger style picking and power way more than the guitar. My fingers are also more built for the size of bass strings!

What led you to playing a 7 string bass and how did you find one? 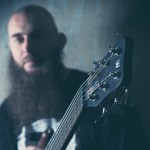 I always had ideas for riffs and techniques that used more than 4 strings and back in 1997 I saw that Conklin made a 7 string bass. It seemed like the perfect amount of strings for me, not to many and not to little. I bought one in 1999 and primarily have played 7 strings ever since. I was lucky enough to start working with Warwick in 2012 and they built me a custom shop 7 string! That was so amazing because Warwick has always been my favorite and I have had a 6 string Corvette for 15 years but they didn’t make a 7 string. So when I finally got my hands on it, I knew this is what I would play forever!

How is your new album Chaos Labyrinth different from other Jeff Hughell projects?

Chaos Labyrinth is different because it’s a whole new level of sounds and dynamics from anything I have ever done. It has everything from scorching fast lines to heavy brutality to slow, mood setting melodies. There is also a wide range of guests on the album from my good friends, to some of the musicians who have greatly inspired me over the years. Guests include Alex Webster, Steve Di Giorgio, Kevin Talley, Ola Englund, Alex Bent, Tyler Layne, Marc Gilson, Sean Martinez, Matt Sotelo, Brian Wood, and Nick Avlonitis.

Did you have any specific inspirations while writing Chaos Labyrinth?

I wanted to write something that was like a story, that took you through emotions and peaks and valleys when listening from start to finish. I can’t name one thing in particular as an inspiration because it was just me writing what I wanted with no rules and no guidelines. I’m very happy with the outcome!

What is your favorite song from Chaos Labyrinth and why?

It’s hard to pick one song as a favorite because I feel like the whole album is one song. The listener needs to experience it as a whole. But the one song that has a melody that just sticks in my head so much is “Grout Polygraph”. When I heard what Marc Gilson did on the Keys and the amazing feel of Alex Bent’s drumming on it, I was addicted.

Can you walk us through the gear you used while recording Chaos Labyrinth?

I recorded the bulk of the bass for the album at home on my Mac Book direct with my Warwick 7-String Streamer. All the bass lines were then reamped at Castle Ultimate Studios by Zack Ohren. We used my Gallien-Krueger 1001RB head with the Neo 412 cabinet for the clean bass and then we actually used a Marshall JCM 900 for the distorted tracks which almost sounds like a guitar. My bass not only is a custom shop, German made Warwick but it also has custom Seymour Duncan blackout pickups. I always record with a fresh set of Dean Markley SR2000 strings which they actually made custom gauges for me. These things I think really come through with the clarity of all the bass tracks. When Steve Di Giorgio (Sadus, Death, Testament) first heard it, he told me it was the most clear sounding bass tones he had ever heard! Zack Ohren just does an amazing job. He has also worked with Fallujah, Suffocation, Immolation, All Shall Perish and Decrepit Birth to name a few.

How long did it take you to write Chaos Labyrinth?

The majority of the album was written in about six months. The song “Let It Go” was written about a year and a half earlier. During the six months of writing, my work as a tile contractor was slow, so I would literally work on songs, tracks, and ideas almost everyday.

Do you still practice bass every day? What is your practice routine?

I don’t currently practice everyday. I went through a time when I was younger where I would play many hours a day. I feel that sometimes not playing for a few days gives you a fresh perspective when you get back to it. However before a tour or a solo show, I will practice through the set once a day. I also think not over doing it with practice saves me from having serious wrist and hand problems. I know people who have been playing less than half the time that I have and they have problems. One important thing is to start out slow when you practice and work your way to faster speeds.

Do you get nervous before playing in front of people?

I don’t get nervous in front of large crowds at all. The smaller crowds, when you can feel individuals judging you, is what feels much more nerve racking. But the more I do it the easier it gets.

What was the first song you learned to play?

What advice do you have for musicians picking up an instrument for the first time?

Keep an open mind and absorb as many different styles as possible. Make sure it is fun because that is what will keep you doing it.

What is your favorite movie of all time and why?

Casino would have to be my favorite movie! It is such a good story with great acting and plenty of craziness, especially Joe Pesci’s character.

What is your favorite album of all time and why?

I will be working on lots of new material. Some solo stuff and some collaborations for an awesome new project with some of my Warwick brothers that will probably come out in 2016. I will also be doing some killer festivals and club shows with Six Feet Under this summer and enjoying my son who will be born at the beginning of April!