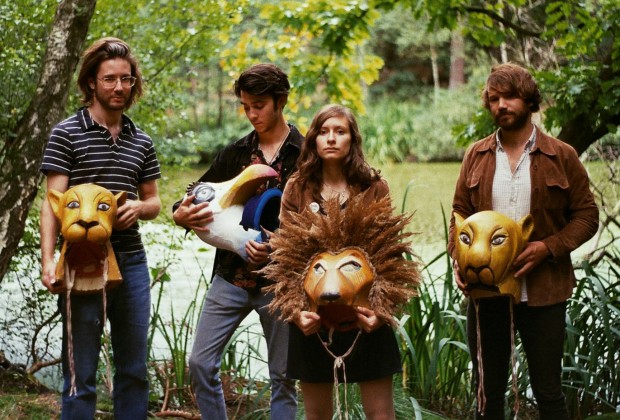 Eerie Wanda began as the music project of Croatian/Dutch singer-songwriter Marina Tadic. After graduating art school in 2011 she joined the Amsterdam group Earth Mk. II on guitar. Finding inspiration in bands like The Velvet Underground, Young Marble Giants, Beat Happening & Daniel Johnston, Marina decided to try her hand at writing her own songs.

A collection of her bedroom demos began circulating among friends in the Amsterdam music scene and eventually made their way to veteran producer/bassist Jasper Verhulst (formerly of Lola Kite/Moss, currently in Jacco Gardner) who encouraged her to put a band together and record a proper album. After adding Bram Vervaet (formerly of Lola Kite) on lead guitar and Nic Niggebrugge (also currently in Jacco Gardner) on drums, tracking began for the debut Eerie Wanda album in an old Cold War-era bunker in Vondelpark, Amsterdam.

Eerie Wanda’s new release ‘Hum’ will be out 2/26 on Beyond Beyond is Beyond. You can stream the track Vinny below or click here to preorder the album.

We reached out to the band via email for a short interview:

Congratulations on your upcoming release “Hum.” I’ve been listening to it pretty much non-stop since I got a copy.

Can you give us a little background on the writing of this album?  Does the band collaborate or are the songs written individually?

Marina: I wrote the songs individually; the melodies, structures and lyrics but the arrangements are written by the whole band. The structure of the song Hum was changed a bit by the band too.

Marina: Jasper created a studio in his and Bram’s rehearsal space in a cold-war bunker in a park in Amsterdam.

Marina: Most things were planned ahead but yes some of the arrangements were written in the ‘studio’. The nice thing about having your own space is you can play around as long as you want to (which could also become a problem). But it was clear to us from the beginning that the songs didn’t need that much and the arrangements should be just as intuitive as the songwriting so it was all pretty smooth.

What were some of the challenges in recording this album and how long did it take?

Jasper: We recorded the whole album pretty much live after a couple of rehearsals. Some songs were re-recorded months later because we felt they weren’t the right tempo the first time we recorded them.

Are there any key pieces of equipment that you must have for recording or playing live?

Jasper: We like to use towels on the drum heads

Speaking of playing live, I see that you’ll be at SXSW. What do you look forward to most at SXSW?

Marina: Sharing our music out there and watch other bands and enjoy the city

Jasper: I’ve played SXSW a couple of times before and I’m really looking forward to stay at my friend Sun Jue’s place again. And what Marina says of course

Do you have other US shows in the works?

Marina: We’re currently in the process of getting VISAS, and if we get them we will have a 2-week US tour.

What can we expect from you after the album comes out?

Marina: Another album and hopefully a lot of shows around the world

Marina: Thanks for the interview and we’re glad you enjoy the record:)