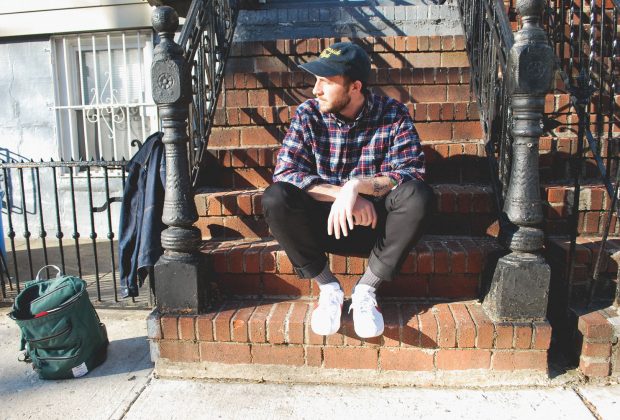 “I want to see sideways, when I’m looking straight ahead, and I want to know what death holds for me” sings Chris Robbins – a NYC-based songwriter taking cover under the moniker CC Mose. Those words (which are the opening lyrics to Robbins’ debut album as CC Mose) serve as the perfect introduction to the next eleven tracks of melancholy pop perfection known as Beat Me out 8/19 via new CA tape label Plastic Jurassic.

Bridging the gap between lo-fi darling and sun-burnt hymnist, Robbins quietly reminds us throughout the record that not even the warbliest, scuzziest, blown-out, digital bliss can stand without the foundation of a well crafted song.

Recorded almost entirely by himself, Beat Me is a culmination of songs written during a somewhat transient period in Robbins’ life. Though conceived in Kansas City, MO, the majority of the record was realized in the basement of a home in Portland, OR that Robbins shared with three friends in the summer of 2015 and fine-tuned in the bedroom of his Brooklyn, NY sublet. Much of the charm of this record was derived from necessity – the lack of space or proper studio equipment fueled a unique and beautiful record- an atmosphere that Robbins himself would be hard-pressed to recreate.

The Noise Room caught up with Robbins via email:

Your bio mentions that these songs were a result of pent-up creativity. Can you give us a little background on the writing of this album?

Well it wasn’t written as an album really.  Each song was recorded during separate “sessions” dating back to January 2013.  Probably 75% of the songs on the album were written as I was recording them.  I’d go downstairs into the “studio” that was in the house I shared with Other Lives in Portland, OR and start a song from scratch.  Sometimes it worked, sometimes it didn’t.

I understand that you set-up your own studio. What can you tell us about the gear you used, the room(s), and any limitations that you may have had.

It wasn’t necessarily a studio.  It was a section of the basement in the house I was living in that Jesse Tabish (from Other Lives) had deemed his “studio”.  He had some incredible gear down there and a small collection of microphones.  I pretty much stuck with one microphone (I can’t even remember the model of it) and recording everything with that.  Like I said, I wasn’t intending on making an album so I wasn’t paying close attention to the gear I was using.  I was just having fun and getting some creativity out.

I really like the vocal treatment throughout the album but the distorted vocals on “The Debra Song” and “The Janet Song” stand out. What effects did you use to achieve this?

I ran both of those effects through a plug-in in Logic that is essentially a ProCo Rat effects pedal.  Throw a little reverb and a little slapback on those and BAM, there’s that sound.

Did you do the all of the recording and play all of the instruments yourself or were there others involved?

I recorded and played everything with the exception of “Voice Of Death” and “A Sad Song”.  Dave Gaume (a good good friend of mine from Kansas City who is the best sound engineer in the biz) recorded and mixed both songs and played bass on “A Sad Song”.  Andy Wendling (who I grew up with, played in a band with previously and is one of my best friends from Kansas City) played drums on “Voice Of Death”.

I definitely use the studio as a songwriting tool.  I did on this record at least.

Some songwriters use the medium as a personal journal while others take a more observatory view. Where do you see yourself in that spectrum?

When I received the album, I listened to the whole thing as one but it’s rare to listen to a complete album these days. Was “Beat Me” conceived as a one cohesive unit?

Not all all but the songs somehow ended up fitting together pretty cohesively.

What can we expect from you after the album comes out?

I’ll let you know when I know.