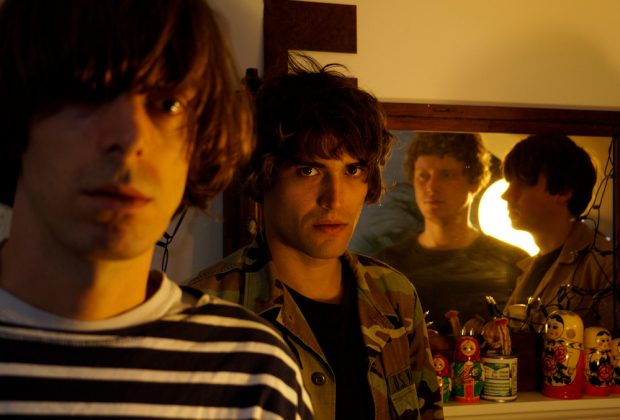 For 2017, we start our Making Noise series with the Proper Ornaments, a project of James Hoare (Ultimate Painting, Veronica Falls) and Max Oscarnold (Toy, Pink Flames). The band germinated slowly from their friendship, which began when Max distracted James from shop-keeping, as his then girlfriend attempted to steal shoes. Max was freshly arrived in London from Buenos Aires; helped out by Andrew Loog Oldham as it happens, to escape a drug-led implosion of a previous band and a family member’s plan to have him sectioned.

The chance meeting blossomed into an epicurean riot of luminous highs and cold, dismal crashes that conversely produced music that was very well ordered and faintly angelic. It was so much deeper and more refined, serious, simple and affecting than anything suggested by the bare facts – a guitar band in East London, ten years into the infancy of a millennium that had so far freighted those five words with plenty of horrendous mental associations.

The Proper Ornaments will release Foxhole on January 20, 2017 via Cumberland Records. Take a listen to track two, “Cremated (Blown Away)” below.

They released a single on San Francisco’s Make a Mess and an early E.P. with London’s No Pain in Pop in 2011 – then a collection, Waiting for the Summer (Lo Recordings) in 2013, which bore the influence of past UK guitar music: The Beatles, Felt, Durutti Column, Television Personalities, Teenage Fanclub – framed by West Coast psychedelia and sunshine pop. Tape recorded and unpretentious in all sorts of ways, it seemed bound to slide around the sides of a snow globe-like mainstream, into that ambivalent fate of being a bands’ band: Real Estate, Woods, Crystal Stilts, and Metronomy solicited them for support slots.

Proper Ornaments hold the attraction of seeming to not try very hard at all and achieve something outstanding nonetheless. Quite apart from our attachment to laziness and chance which make this seductive, textures of dappled drums, softened-out guitars and vocal harmonies that slide along as effortlessly as this, any evidence of conscious construction spirited away, are in themselves totally ecstatic to listen to.