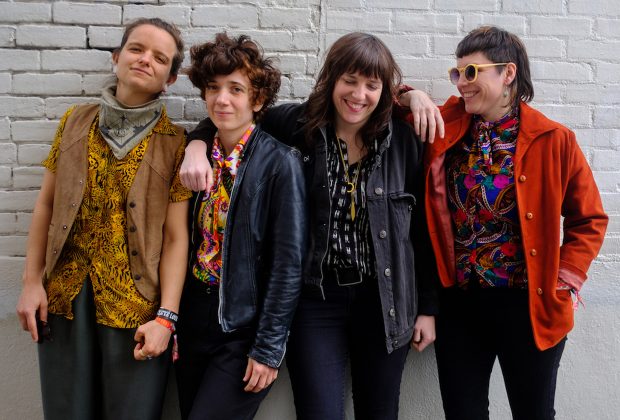 Seattle indie-rock band Moon Palace – led by twin sisters Cat & Carrie Biell – just released their dreamy, psych-inspired album Shadowcast. The quartet previously shared singles “Bold” with KEXP, as well as the contemplative “Who You Are” via Medium, giving listeners a look into the hazy, nostalgic world of Shadowcast.

The record is a balance between light and dark, as the band elaborates: “Shadow self and trying to be positive through interactions with people you love. Outer world to the innermost personal world. Balancing the sun sign and moon sign. Knowing your inner personal self within the context of the universe.” Throughout recording, the band members would text each other songs from Sonic Youth, Talking Heads, Duran Duran, and Big Thief, shaping the sound of what was to come.

When they’re not making music, Carrie works with the blind and deaf to secure employment (as well as taking care of her 5-year-old son), Jude is an elementary school teacher & drum instructor at Queer & Trans Youth Music Program, Cat is a graphic designer and Darcey also works in art direction and film production. Catch Moon Palace on tour and stay tuned!