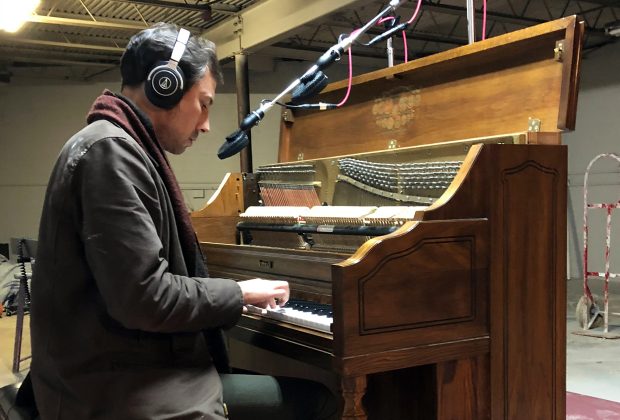 Massachusetts-born, NYC-based musician Jaye Bartell began working in Asheville, NC in the early 2000s as part of the city’s thriving music and writing scene. He relocated to Buffalo, NY in 2006, where he released his first album, 2008’s Feeling Better Pilgrim, which incorporated field recordings and looping effects. The Dog’s Dinner arrived after a move back to Asheville in 2009 and featured collaborators including guitarist Shane Parish of Ahleuchatistas. Recorded with musician J Seger, the EP, Elation, followed in 2012, and Parish, Seger, and Emily Easterly joined him on 2013’s Loyalty. Bartell moved to New York City later that year and, after a tour in Ireland and the UK supporting Angel Olsen, began writing material for his next album, which took inspiration from his new environs, the theme of “resettlement,” and relevant works by writer Spalding Gray and Eileen Myles, among other literary influences. The spare, Cat Power-inspired 8 Covers, including renditions of songs by Broadcast, Yoko Ono, Frank Sinatra, and more, was released in 2019. Fish Tank was released in February 2020. A new full-length, Kokomo, will appear in the summer of 2020. Again recorded at Drop of Sun in Asheville, Kokomo features piano and keyboard-focused songs with some of the most extensive arrangements Bartell has so far produced.

“Too Late” is a ballad about waiting for the miracle, specifically related to making music or art as a purpose for a life, and to use that purpose to “be a light in the unlit rooms” and “be alive among the unlived lives,” to be useful as much as to have a use. It’s a prayer, although decisively not a Christian or religious one, for some form of spirit or power to simply “be here at all.” The lyrics take some inspiration from Ingrid Thulin’s monologue in Bergman’s “Winter Light,” which is a story about “god’s silence.” She angrily tears off the bandages on her hands, covering blistered rashes from eczema, and says” God, why have you created me so eternally dissatisfied, so frightened, so bitter. Why must I realize how wretched I am. Why must I suffer so hellishly for my insignificance? If there is a purpose to suffering, then tell me, and I will bear pain without complaint. You made me so very strong in body and soul but you never give me a task worthy of my strength. Give my life meaning and I will serve you.”