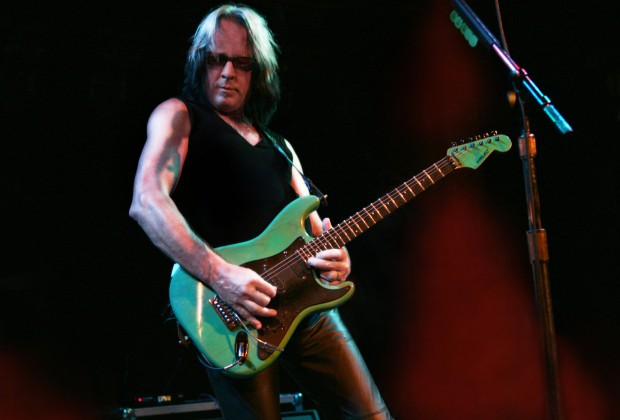 In Part One of my interview with Todd Rundgren we talked about his upcoming performances of his 1973 album A Wizard, A True Star. Below is Part Two where Todd goes a bit more in depth about his gear and recording set-up. He also talks about what it takes to become a sucessful musician in this current era.

Getting back to your equipment, I noticed you were using a Line 6 Flextone III amp.

That’s kind of what’s available. My personal amp is an old Line 6 AX212. That’s what I keep at home but it’s just too big of an ordeal to ship it back and forth to the mainland all of the time. It’s got a wider range of sounds, or at least a range of sounds that I can fairly easily tweak what I want out of it. The Flextones are kind of a sub-set of it. It’s not exactly the same thing and not the same degree of controllability, so under ideal circumstances I would take my AX212. Then again, I think the (Line 6) guitar Pod probably has more sounds than the Flextone does.

Do you use the off-the-shelf Line 6 software for creating your sounds or have you developed your own tweaks?

For Arena I used (Line 6) GearBox. I actually did Arena entirely on my laptop.

Right, I saw an interview where you described recording Arena using Reason and RiffWorks.

Yeah…Reason, RiffWorks and GearBox were the principle software tools and then I just used my Line 6 export as the audio I/O.

Do you see that as the direction your studio is going? Smaller and more portable?

Yes, smaller and more compact. I’m moving away from the hardware dependent systems like Pro Tools. Pro Tools is still standard as long as you get sound in and out of it you can work with other people, but I have, especially out here, so many problems with the hardware. The air is much saltier here and if you don’t turn the thing on for eight months then it doesn’t come on when you hit the switch. I find Digidesign to just be artist-hostile as well. If I were buying $250,000 worth of equipment for a studio, they’d be real friendly to me. If you’re just somebody with a small system, they make you jump through all sorts of hoops. It’s a pain. I’m going for much more of a generic sort of thing. I’m on the beta program for this program called Record which is Propellerhead’s next evolution of Reason. Essentially it integrates it into a whole multi-track recording environment using FireWire interfaces and things like that instead of cards that have to be plugged into a desktop computer. I have no reason to use a desktop computer anymore.

With this, can you now use the studio as more of a songwriting tool?

It sort of evolves from the songwriting directly into the recording. It used to be when the studio was a particular and separate environment the songwriting had to be done whereever you could do it, and then you went in and recorded it, but now it seems like the songwriting goes seamlessly into the recording in a way. You start working with Reason and after a while you refine the sounds to the point that they’re the final sounds that you use. Formerly, once I did the compositional work in Reason, I would take the bits out that I wanted to keep, transfer them into Pro Tools and then overdub voices and other instruments on top. But, with my Pro Tools thing giving me trouble as usual, I don’t even want to go through the hassle of fixing it only to have it stop working again, so I figured a way to do it without Pro Tools. As I say, this was pre the latest evolution of Reason that allows you to record directly into it. I would have to use RiffWorks to essentially record all of the vocal and guitar parts as samples, which then got loaded into a sampler that Reason had triggered. So it’s a very strange process in a way, but it gives you a great deal of flexibility in that you can move where samples get triggered and things like that. Kind of a simple, more brain-dead approach than you might need with something like Pro Tools.

Are there any key pieces of software or equipment that you must have for recording?

Well I’ve been using Reason pretty extensively and the great advantage of it is that it runs well on a laptop so wherever I am I have the advantages of all of those sounds, all of those kinds of samplers, and things like that. Over the years, there were limitations in it that would cause you to think twice about trying to do certain things like, for a long time, they had a sort of tempo mapping. So whatever you did in Reason, it was the starting tempo. You couldn’t do any rubato or ritardando or any of that sort of stuff, you had to be stuck at one place. But now there’s not only that but the Record software also has time stretching built into it. The advantage is I can do a lot of sophisticated repair work that I couldn’t have done before. Jesse (Gress), my guitar player, had a specific problem and I wasn’t exactly sure how it could be solved, but now this new time-stretching ability has offered a solution to it. I guess it’s getting to a point where you can’t compact things down much smaller. Pretty much all the software you need is in the laptop. Maybe people someday will be doing full-on production with an iPhone. You’d be able to get maybe two sliders onto the screen. For me, when I get down to the serious part of mixing, I’ll connect a larger monitor to the laptop just so you have more workspace for all of those virtual devices.

Earlier this year you’ve re-united with the New York Dolls to produce their new album Cause I Sez So. Are there any up-and-coming bands that you are working with either as a producer or a mentor?

Not at the moment. I’m usually in discussions with someone about doing something but there is nothing pinned down right now. As far as I know, I’m going to be working on the AWATS thing and then doing some additional touring behind Arena, going probably into October. That would give me a brief window in November and December, and who knows? Something could always come up between now and then. But having to tour more than I used to doesn’t give me the same sort of wide-open schedule that I might have had back in the day when I would only tour maybe three months a year. Now it’s six to eight months a year just because the whole economics of the music industry has changed.

Does that mean you have to play more now?

Yeah, well that’s the same as it ever was. If you really wanted to capitalize on whatever success you’ve had with records, you went out on the road because you’re keeping 80% of the ticket price as compared to 10% of the album price. It was always more lucrative to have a healthy touring life than to have mediocre success with records. I’ve always known that I would have to continue to tour to keep myself visible and now it’s a significant aspect of my income. The production side of things has been affected just like everything else has. There are fewer (label) records being made. The ones that are made have smaller budgets.

One last question, what advice could you give to someone who is trying to break into the music industry and survive long term?

I still realize that regardless of the condition of the music business or your position in it, it’s always better to cultivate an audience by performing. The labor may be more intense then just sitting home collecting record royalties but the rate of return is higher because you’re selling your t-shirts and merch. And nowadays most artists probably sell more CDs at their merch tables than they do in a record store. You’ll still make records and you’ll still do all of that other stuff, but your principle means of promotion is going to be (playing) live and representations of your live performance. For instance, clips that wind up on YouTube or something. Most of us are not going to get onto Saturday Night Live.

Yeah, but you know you have to elbow Kelly Clarkson out of the way or something.

Read Part One of my interview with Todd Rundgren