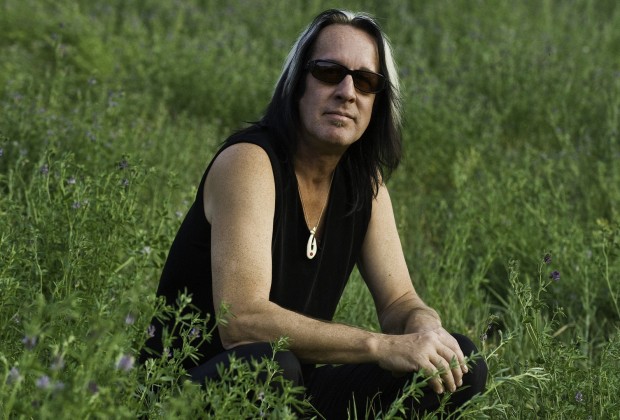 If you know me, you’ll know that I credit Todd Rundgren with my life-long appreciation of music. I was sixteen and had already seen a few concerts. However, the night I saw Todd with Utopia in Scranton, PA, influenced me more than any other. I was totaly blown away and couldn’t stop thinking about the show. I wanted to see more live music, work on my guitar playing, and get involved with other musicians.

When one looks at Todd Rundgren’s musical biography, they’re sure to find something that they’ve been influenced by as well. From his own collection of hit songs including “I Saw The Light”, “Just One Victory”, “Hello It’s Me” and “Can We Still Be Friends” to his production credits with artists such as Patti Smith, Cheap Trick, Psychedelic Furs, Meatloaf, XTC, Grand Funk Railroad, and Hall and Oates, most all of us have been touched by his work.

Some thirty years after that life-changing show I find myself on the phone talking to Todd Rundgren from his home in Hawaii, discussing his recent tour, his upcoming performances of A Wizard, A True Star, along with his guitar and recording set up.

You’ve just finished touring in support of your latest release Arena and you seem to be out on the road a lot over the past few years. Do you enjoy touring or do you consider it necessary as a working musician?

Well I enjoy the playing. The traveling is kind of grim, especially in these sort of stressed-out times. When the price of fuel went up, it made it more prohibitive, for instance, to get a tour bus. But it is still incredibly inconvenient and unpleasant a lot of times to have to fly. We find ourselves doing it the real old-fashioned way by driving around in a mini-van from gig to gig just as if we are starting over again but in some ways it’s the only practical way to travel. So the playing part I’ve always enjoyed and I still enjoy, but the traveling is as bad as it’s ever been.

Does that influence the size of the band that you take out on the road?

It is a consideration. Every time you add another member, you’re talking about transporting them and their stuff and then housing them. Whatever you pay them in salary, that isn’t the actual bottom line. It’s all of the expenses in moving a human being around in this day in age. So it is a consideration but it isn’t the principle one. In other words, I’m not going to compromise what I think needs to be done in terms of bringing the music to people live. If we have to carry another band member, if we need a five-piece band, or a six-piece to pull it off, then that’s what it’s going to be.

There is a lot of excitement building over the upcoming performances of your 1973 album A Wizard, A True Star (AWATS). You’ve already assembled the band, but how do you even approach a project like this?

Well, you’ve got to be methodical about it. Right now I’m in the process of breaking it down into proper-size chunks. And, in addition to that, it’s not simply a musical presentation, its got to be more of a theatrical thing. I think the expectations exceed a typical sort of concert. Also it’s of an era when, at least with my shows, I think most artists were doing something that was a little bit more production-oriented live. People were wearing costumes and they had special effects and lasers and that sort of stuff to enhance the shows. We’re going to truck a bunch of that out as well.

That was actually one of my questions. Can we expect any theatrics or costumes?

Yeah, it will not just be the music of the era; it’ll be a presentation in the style of that era.

How will you handle the instrumentation, the different sounds and the audio effects used in 1973? Will you use vintage equipment or samples?

We will, if necessary, sample things that we can’t reproduce live. We don’t intend to do a lot of click tracks or an extensive amount of looping or anything like that. I think that we’re going to try, as much as possible, to play and sing the record. Parts of it have been done before. It’s never been done in its entirety but certainly parts of the record have been performed.

How do you envision the show? Will you perform this all as one set or as Side “A”, intermission then Side “B”?

At this particular point it will be mostly true to the original in its running order but I am going to make some slight modifications to accommodate the fact that there are certain peaks and climaxes in the music that appeared where they did because, in those days, all recorded music came in two parts — Side “A” and Side “B” — and when performing it live that constraint, of course, isn’t there. I think that as a piece it might actually benefit a little bit by just a slight variation in running order from the original. But there won’t be a whole lot of that. We may expand a few things and it’s conceivable that we might interject one or two small things into it that may not have been in the original but might suit the presentation overall. So I’m not being absolutely doctrinaire about how it’s done. I’m not going to do it just as Side “A” and Side “B” and there you have it.

You’ve often revisited your material and your With A Twist release is one example. How does this differ?

I don’t think that we’re going to transform the material the way we did on With A Twist. That was the essential conceit of that record. It was all familiar songs done in an unfamiliar way. But this will be done, pretty much, in a familiar way and the modifications will all be in terms of the theatrical aspects of it. In other words it’s got another layer to it and I suppose that With A Twist had an additional layer as well in that we were doing more than just playing the music. We were putting on, I don’t know how to describe it exactly, it was a show, but it was us kind of pre-living a fantasy of instead of being a touring band, we were a band that played in the same place every night.

I often wonder what happened to the Tiki Bar from that tour?

It got transformed and reused in various states. As a matter of fact, pieces of it were recycled bits from the No World Order tour, which was a big kind of aluminum pod construction that sat in the center of a room, and we used chunks of it to build the bar for the Tiki tour. At one point after the whole Tiki tour thing was done we packed up a bunch of that stuff and went and set-up an installation at Burning Man. So it did have another life after that, briefly. It’s all sitting in a warehouse in Sacramento and could conceivably be trucked out again.

We used to have a local Tiki Bar called the “Lanai” but it’s gone now.

You know they were a big craze for a while and then they disappeared. Then there was another little mini-craze and in most major cities there’s a tiki bar. Then again, we’ve lost some significant examples. Most importantly was the Kahiki in Columbus, which was a huge place that got taken down so they could build a drug store or something.

As of now you have six AWATS shows scheduled in the US and two overseas. Will there be additional shows?

I believe we’re adding one more in the US. I think in Minneapolis.

So we need to get out to one of those if we’re going to see this?

So far, yes. There are a couple of constraints. One is that it being a much larger production, we have to compress the production period down into something relatively compact. It’s not something that I can take off the road for a while and then just start up again. And the significant musical constraint is that Roger Powell still has a regular job which he has to return to. So he can’t go out for months and months at a time. He can go out for a couple of weeks and then has to go back to the job.

Are there plans to record and release the show either as a CD or DVD?

It’ll be recorded, it’ll be video taped and other possible things were thinking of is a pay-per-view Internet stream live during the show for people in other parts of the world who can’t make the trip. While it’s happening, we’re going to exploit the hell out of it because it’s going to take us a week to rehearse it then we only play seven dates. We hope it is successful enough so that we might get some additional dates added in Europe.

It seems that would make sense being that things are closer together in Europe compared with the US.

Yes, once you get there, you might as well go to more than two places. England and the Netherlands are just two of my stronger markets.

The All Tomorrow’s Parties Festival has been having artists perform complete albums and Lou Reed has had success working with Julian Schnabel on the live concerts and film of his album Berlin.

A number of people have done that. I hear that it’s a big thing for Cheap Trick and for Sparks and a number of others. Van Morrison is doing Astral Weeks. The difference in this is that we’re not simply reproducing the album; we’re turning the album into a show. We used to have theatrics in our shows a lot but this particular record never got the theatrical treatment.

Read Part Two of my interview with Todd Rundgren