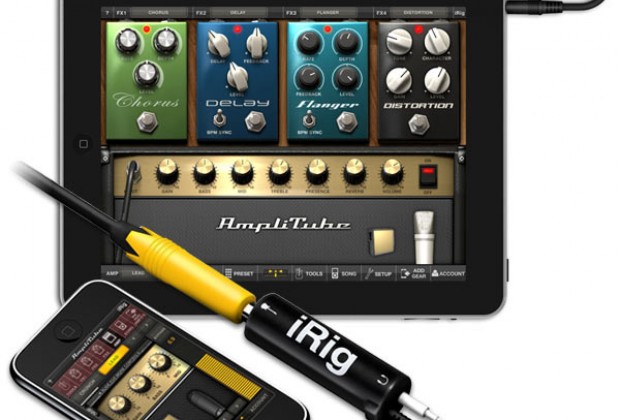 I downloaded the free version of AmpliTube before receiving the iRig as I wanted to try it out. After receiving the iRig, I purchased the full version for my iPad. The app cost $19.99 and is worth it however I feel that after spending $39.99 for the iRig, this software should be included for free.

Connecting your guitar or bass to your iPad with the iRig was a no-brainer. Just plug it into the headphone Jack, plug your guitar into the 1/4 inch input and insert your headphones into the 1/8 inch jack. While the actual iRig is pretty basic, the app is where all of the fun takes place. The graphics and layout of the app are easy to use and after launching the app and doing a few minor initial settings, I was rocking away.

The first thing I did after making sure that I could get some basic noise out of the iRig/AmpliTube combo was to use the built-in tuner.I then ran through some of the presets that are included. I would have preferred having names instead of numbers for identifying the presets. 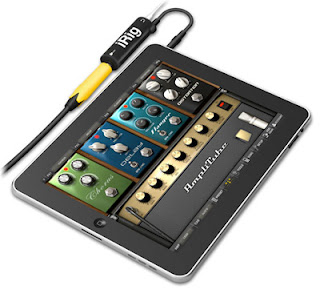 It’s easy to create your own sounds and save them as presets. Just select an amplifier and cabinet then, if you’re in the mood, add an FX pedal or two (up to four if you want). The amplifiers are based on, but are not exact models of common amps such as Marshall and Fender. The cabinet selections are similar. The stomp boxes included Flanger, Phazer, Octave, Noise Filter, Chorus, Distortion, Envelope Filter, Wah, Overdrive, Fuzz And Delay. You also have a choice of two microphones.

Other useful features include an “Ultra-Low” latency setting, an ability to import songs to play along with and a metronome that can come in handy. In addition, IK Multimedia has just released DrummerTracks, full song drum tracks designed for use as play-along tracks for the AmpliTube range of software and mobile apps.

The bottom line is that this is a great device for practicing. I’ve seen some videos where people are using this set-up live or in the studio however I don’t feel that it will work for me yet. I do feel that it’s a great start and look forward to more developments that will move it closer to a full production tool.