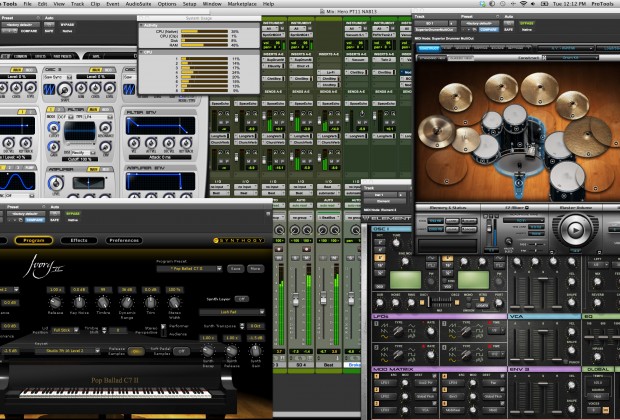 For most of 2012 I’ve been exploring portable recording options. I’ve been mainly focused on iPad Music Creation but have been using my MacBook as well. My goal with this project is to be able to easily throw a few items into a bag, visit my cabin by the lake or friends who live out of town, and sketch out some music. I would then bring it back to my home studio and develop the music using Pro Tools. I also wanted to do this on a relatively inexpensive budget as it is not that often that I would need this system.

My revelation came while I was searching through Avid Audio Forums (formerly known as the Digi User Conference). It was there that I discovered that I could have two installations of Pro Tools as long as I only used one at a time. My iLok USB device that held most of my software licenses would make sure of that. Many of my key plug-ins also allowed duel installs. By using Pro Tools this way, I wouldn’t have to worry about transferring sessions between different formats.

Now that I had the software in place and could easily transfer sessions from my portable system to my home studio, I needed to add some small but powerful hardware to complete the rig. This presented its own set of challenges. I only needed a couple of inputs but I wanted two headphone jacks for my I/O. Should I use USB or Firewire? I’m not really a keyboard player but I did need a MIDI controller. M-Audio and IK Multimedia both recently released 32 key units that would work, but which one would be best for my work flow? I also wanted to have some sort of monitors as headphones get a little uncomfortable after a long day.

I’ve got most of these figured out and will continue to test out the gear. Over the next couple of months I will post reviews of the products that I’ve tried. These include M-Audio’s ProFire 610, BX5 D2 Monitors, and their new Axiom A.I.R. Mini 32 keyboard controller. I’ll also take a look at the iRig KEYS from IK Multimedia and the Alesis M1 Active 520 monitors. There will be a few plug-ins that I’ll feature as well.