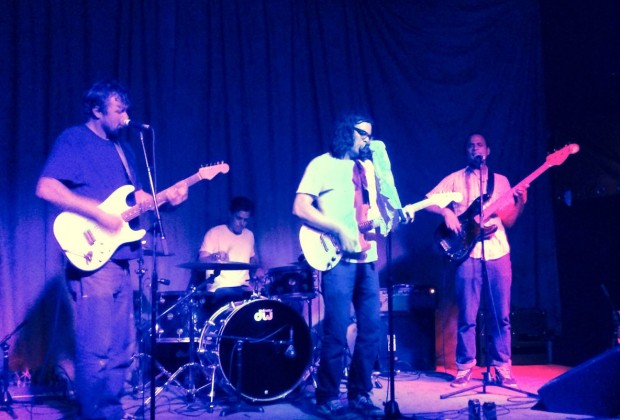 In one week from today The Noise Room is presenting its first show ever. On Thursday, February 13th, Elle Belle, Sandy’s, and Rustangs will take the stage at the Hemlock Tavern in San Francisco, CA. Over the past month, as we get closer to the show, we have been featuring each of the bands in more depth. By providing music, videos, and interviews, we wanted to give you the opportunity to explore these bands to find out who they are and what they sound like.

Today we have an interview with San Francisco-based Rustangs who have been very busy lately. Last year they played a number of shows and released two full-length albums including Rustang and I’m Not Stalking You. Fur Tuxedo Records released I’m Not Stalking You in December. Take a listen to “Other Side of the Street” from the new album and read the interview below.

Can you tell us a bit about Rustangs?

The Rustangs started out as a moped gang in the Sunset District of San Francisco around ’08 and quickly began picking up instruments and making noise in “Motorcycle Ben’s” garage.  Shortly thereafter, Garage Club was born and we have been playing shows and burning up the roads ever since…and we’ve also moved on to riding Harleys.  The band’s core members (those of us with a Rustang tattoo and/or consistently show up to play shows) are Ben Young, Nelson Saarni, Josh Yoches, Brett Simundson, and Nicole Andrijauskas. Aaron Mason and Ryan Morgan, (AC and Chino), represent the SoCal annex. We are always working on that perfect B-sides project and just released two full-length albums this year—I’m Not Stalking You and Rustang.

Your album “Rustang” was released in August of 2013. How do you see this fitting in with your other work and what does it mean for the progression of your music?

Rustang is the highest fidelity record we’ve released thus far, mostly due to our friend, and the immensely talented, Alexi Glickman, who helped us record and produce this one. I guess you could consider that progress. We really love the way it came together and it was a significant shift from our earlier recordings where we drunkenly wrote and recorded songs on small tape machines.

Can you give us a little background on the writing of this album?

Typically Ben writes the lyrics and finds about three chords to go along with them which is when we get in a room and we’ll figure out how the song goes together.

We didn’t always, but now we have our own studio located at an indoor skate park at Proof Lab Surf Shop in Mill Valley.

Are there any key pieces of equipment that you must have for recording or playing live?

What can we expect from Rustangs in 2014?

We’re a motorcycle gang first. Band second. Often times, we’ll peruse about town on bicycles seeking photo booths and shots of Jameson whiskey with Saurkraut backs. Our recent endeavors have included Christmas tree bonfires and more exploring of the Northern California Coastline to swim in the ocean and surf. But not Ben, because he had knee surgery 10,00 years ago and won’t stop whining about it.