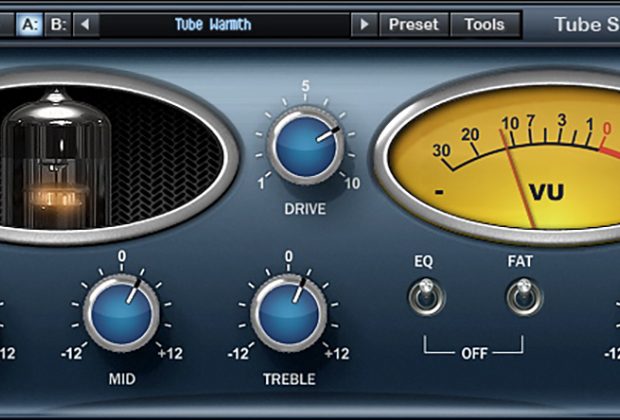 To get your copy, visit: wavearts.com

Tube Saturator is the world’s most accurate real time tube amp plug-in. Unlike other tube simulators, which use radically simplified models, Tube Saturator uses state of the art circuit simulation technology to capture every nuance of an analog circuit. With circuit simulation, the analog schematic (consisting of the individual resistors, capacitors, tubes, and so on) completely defines the signal processing. The schematic is converted into a system of non-linear differential equations which is solved at each sampling period, in realtime. That’s mathematical talk for “it sounds exactly like the analog circuit”.

Tube Saturator is in fact a basic circuit consisting of a Baxandall type three-band EQ feeding two 12AX7 triode preamp stages, similar to preamp stages you’d find in a guitar or high fidelity amp, and hence you can get the same distortion and tonal characteristics that you’d get from saturating a real tube preamp. The circuit simulation technology is extremely CPU intensive and a fast computer is recommended to run the plug-in.

Increasing the Drive control increases the (digital) input gain while decreasing the (digital) output gain, so you can easily adjust distortion levels. The FAT switch changes the bias circuit of the first preamp stage to increase gain and saturation.

Use Tube Saturator to add a bit of analog warmth to recordings, or increase the drive for some distortion. You can use it as a saturating peak limiter too.

This is a small industrial beat, with a 303 on top (filter gradually opening up). The first file is the dry signal, then with the 303 driving Tube Saturator hard. You can really hear it getting much more aggressive and fat.

A simple 8 beat, first dry, then with Tube Saturator adding some lows, highs and lots of drive. It really accentuates the low end low-mid ranges and makes everything much fatter.

A muffled vocal line made much warmer, brighter and sizzling with some high-end boost and drive from Tube Saturator.