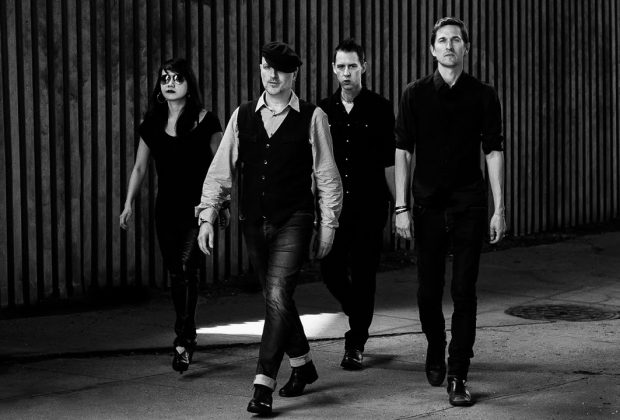 New Wave, Glam, Post-Punk, Indie, Art … herMajesty’s Rock music scales thematic preoccupations of love, loss, surrender, chaos, and hope, over a brooding wall of sound.  Their proclivities are well-captured on record and pack a wallop in their live performances.

Sound is just one part of herMajesty’s experience however.  Their name draws references to royalty, luxury, London, and is based on the phrase “His Majesty, the baby”  by Sigmund Freud.  Track for track herMajesty communicate complex human emotional experiences and grapple with themes that convey loss, sadness, detachment, and anger.

Lead singer and songwriter JP creates characters in his songs who amplify particular emotional situations and feelings.  herMajesty’s sound draws from the voices that occupy his psyche and the songs themselves.  Sometimes he is a lovelorn troubadour, or in a song like “My Body Your Mind,” he embodies the experience of trauma. In other songs like “One By One” and “World Smiles”,  JP taps into the kind of disillusion that happens to children over time.

Their new single “I Saw The Dog,” a collaboration with regional imprint Midday Records, releases on 7” vinyl November 2, 2017.   It is  a song that draws a connection between unrequited love, dominant-submissive relationships, and current exploitative political systems.   Pre-production for “I Saw The Dog” began in the fall of 2016.  Grammy-winner Nic Hard, who has been working with herMajesty since 2010 approached JP and suggested using Henry Hey (keyboard player The Next Day, musical director of Lazarus) and Chris McQueen (guitarist of Lazarus, the Bowie Play and guitarist of Snarky Puppy) on the song.

The idea turned into a wonderful, collaborative experience in the studio.  McQueen’s dystopian reverb and guitar howls blaze an infernal backdrop to Henry Hey’s lush keyboards and JP’s intimate and, at times, humorous political observations.

“The choices we make while in intimate relationships, the qualities of the people we choose to be with and those that we elect to office often communicate our world view. Do we seek to base our relationships and our interactions with the rest of the world on respect, love, collaboration, mutuality or divisiveness, dominance and control? Relationships are political and our political choices are reflective of our experiences in life, our values. As an artist, I communicate my reflections on these issues through my lyrics and the songs that I write” JP comments. “I Saw the Dog” alludes to these issues through references to emotional shaming, control, communist and fascist symbols, waterboarding and imperialist warfare.

herMajesty’s sound also draws from JP’s Greek-American heritage.  Their 2016 EP “My Body your Mind” features Middle-Eastern and Greek instruments (oud, bouzouki) on the title track.  Immigrant blues meld in with their glam and new wave influences and can be readily heard on tracks like “Fashion Trance” and throughout to define their distinctive wall of sound.  “My Body Your Mind” is accompanied with a semi-nude photo series of JP by L.E.S. counterculture archivist Alice O’Malley to convey the impact of trauma on the human body.

JP moved to the LES, a historically immigrant neighborhood of NYC, from Samos, Greece.  Although he has been living in the US for some time, he admits that he doesn’t fully identify as American.

“Depending on the situation that I find myself in, I access the part of me that is wholly Greek, or the part of me that is wholly American. That is the best I can do as I try to integrate these different cultural realities that reside within me. There are periods where I feel like a resident alien and I am floating, neither here nor there. I think that’s where my deepest connection to Bowie comes from. I always saw Bowie as the resident alien of not just Earth, but the planetary system and I could certainly identify with that.  It didn’t take drugs to make me feel isolated, detached and different, my immigrant experience made sure that I felt a certain way about myself and the world around me ” the artist shares.

The opportunity to work with guitarist Carlos Alomar; Bowie’s longtime music director and collaborator, came several years after his arrival in America. The impact of this experience was immeasurable for JP on a personal and artistic level.   There were many paths to success herMajesty could have taken in their formative years but artistic independence and authenticity continue to drive JP more so than bowing to trends.  herMajesty often plays local shows at Rockwood Music Hall, Piano’s, Highline Ballroom and Bowery Electric. They successfully drew 100 fans to their not-too-long ago debut at Irving Plaza and continue to play regional shows, while independently releasing thought-provoking sound recordings with sophisticated arrangements and visual art.

“I Saw The Dog,” in collaboration with regional imprint Midday Records, releases as a limited edition  7” vinyl pressing on November 2, 2017 and to streaming and digital stores on November 8, 2017.

One thought on “Premiere: herMajesty “I Saw The Dog””