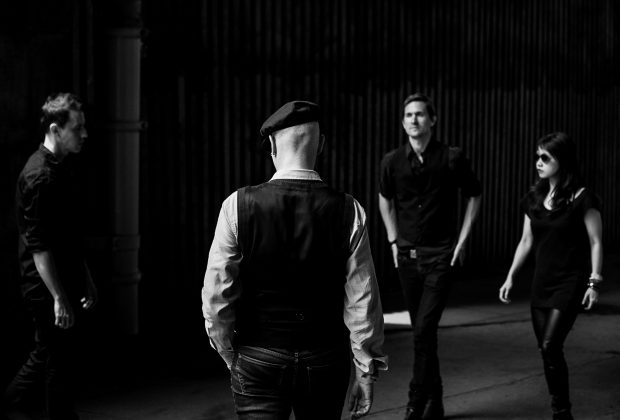 A couple of weeks ago we premiered the new single “I Saw The Dog” from herMajesty. Today is the official release date so we reached out to vocalist/guitarist JP to talk to him about the release. You can can purchase the vinyl at www.hermajestynycmusic.com.

Congratulations on your new single “I Saw The Dog,” released on 7” vinyl today. Can you give us a little background on the song? How was it written and or recorded?

Thank you. The new single evolved over a period of a year and a half. Originally it was a love song about a psychologically abusive relationship. As the last presidential election went into full cycle, I became interested in the dynamic of deceit and lies and domination-submission between a certain presidential candidate and his supporters. When he was elected, the vitriol and splitting which he incited also seeped into the evolving lyrical content of the song as did sound bites from the Gulf wars, water boarding and liberal posturing. What emerged in the lyrical content of the song was a thread of dystopia, exploitation, and fission.

As far as the recording was concerned, I heard the tragic elements performed on a keyboard and the savagery in a squall of guitar feedback. I presented my inchoate orchestrations to Nic Hard, our producer, who suggested we reach out to a couple of musicians who worked with David Bowie on the Lazarus play: Henry Hey the keyboardist and musical director of the play, and Chris McQueen, the guitarist in the play who is also one of the guitarists in Snarky Puppy. They came in and recorded some wonderful tracks that sat nicely on top of what we had already recorded and amplified the tragic and chaotic elements of the song.

This song has been described as “Bowie-inspired.” What influence did David Bowie have on you and/or your music?

Bowie has been a seminal influence in my development as a person and musician. His gender fluid presentation and his dramatic singing along with his fascination with alienation contributed to my developing gender identity and appealed to my peripatetic migrant identity. My emotive singing style is equal parts Greek tragedy, Greek blues, and Edith Piaf through the lens of Bowie’s take on Frank Sinatra.

What were some of the challenges in recording this song and how long did it take?

The challenge that we faced in recording the song was how to capture the sound of an emotional and global political train wreck in a dramatic, pithy and humorous way. It took us close to two years to write, record and master the song.

Most of the songs are written and planned in advance and then we elaborate, embellish and open them up to chance and happy accidents in the recording studio.

You have a number of live shows lined up as this single is released. Are you more comfortable in the studio or on the stage?

I love both. Each speaks to a different part of my creativity and personality.

We like to hear about gear at The Noise Room. Are there any key pieces of equipment that you must have for recording or playing live?

We love Taylor acoustic guitars and the sweet round tone of the Fender P Bass. I have a Neumann mic that is my go-to for tracking vocals. I also enjoy working on Ableton Live and Reason for sequencing and sketching out song ideas. For live purposes I use Sennheiser’s in-ear monitor system. It is incredible.

What can we expect from herMajesty after the single comes out?

We have another single in the mixing stage. It is called “Weightless.” It is an elaboration on love and faith and union despite the inevitability of death. It is an embrace of fragility and the fleeting quality of life. We are also doing a small tour of the northeast that will have us at the Parlour in Providence when this piece goes live. We are playing for the first time at Coda in Cleveland and UHall @ 9:30 Club in Washington D.C. in January. We may swing by SXSW and Europe is always just across the pond.

I am working on a side project called B.O.Y.S. that is an exploration of Greek Blues music through the lens of electronica music. I am working with several Greek musicians on this one. Stay tuned!!! Steve thanks so much for taking some time to speak with me. Cheers.

“I Saw The Dog,” in collaboration with regional imprint Midday Records, releases as a limited edition  7” vinyl pressing on November 2, 2017 and to streaming and digital stores on November 8, 2017.