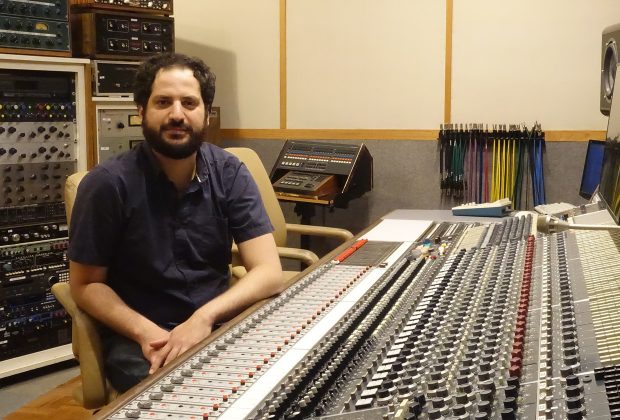 “There’s not a lot of Neve 8038 consoles out there,” says engineer Will Chason (pictured above). “There are even fewer that are in such good condition.”

Chason (Head and the Heart, Sun Kil Moon) has just finished tracking vocals at Hyde Street Studios, with a member of Toots and the Maytals. He’s worked in Hyde Street a number of times during the comprehensive restoration that the studio’s technical staff just completed on their rare Neve 8038 board. Two years ago, the studio’s maintenance techs, Kevin Ink and Dave Dick, began the process of retooling the console for today’s engineers.

“Every replaceable part was replaced: capacitors, pots, switches,” says Hyde Street Studios owner Michael Ward. “We restored a late-’70s masterpiece of a tracking console into the condition it was in when it was new, in 1978.”

Hyde Street Studios, of course, dates back even further than its classic Neve. The original home of Wally Heider Recording (1969-1980), the studio has seen generations of iconic artists, including Santana, the Grateful Dead, Herbie Hancock, Chris Isaak, Dead Kennedys, Green Day and Tupac Shakur, to name just a few.

Under Ward’s ownership since 1980, the studio continues to succeed at balancing its historic vibe and vintage gear with state-of-the-art upgrades. To streamline the functionality of the refurbished board, the technical staff also removed outdated electronics, such as wiring for headphone systems that are no longer in use. The master control and bussing systems were also addressed to significantly reduce the noise floor.

“The result is that it’s just more refined now,” says Chason. “To be able to go into a room with that kind of equipment where everything’s so well taken care of, is huge. You can just sit down, press record and make music.”

Engineer Paul Kolderie (Pixies, Radiohead, Portugal The Man) recorded most of Chuck Prophet’s album Bobby Fuller Died for Your Sins there after the first phase of console restoration was done, and he is about to return for Prophet’s next project. He agrees that the Hyde Street staff’s meticulous efforts make engineering easier.

“When I got my hands on that console, I realized, you don’t have to work hard at all to get great sounds. You don’t have to do much of anything when the restoration has been done properly.”

Hyde Street’s studio manager, Jack Kertzman, points out that though the Neve console is the star of Studio A, the facility has actually undergone a broader technical update.

“Everything is in impeccable shape here,” he says. “We give big credit to Kevin and Dave for that. Our mic collection has been restored and we’ve added to that as well. We also upgraded the digital side of things with Pro Tools 12 and new Avid converters.

“It’s more quiet out there. There’s plenty of parking. There’s a patio for people to hang out. It’s a different vibe,” Kertzman says.

There are five separate studio spaces for tracking, mixing and editing: a 20×18 live tracking room, 17×17 control room, plus an isolation booth attached to each, visual communication between all rooms with monitors and cameras in each,and a 12×17 piano room/lounge. And in keeping with the Hyde Street tradition, Rancho Rivera has its own place in San Francisco recording history:

“We made a lot of records here back in the ’70s,” Ward says. “Tommy Tutone recorded here. It’s still a great-sounding room.”