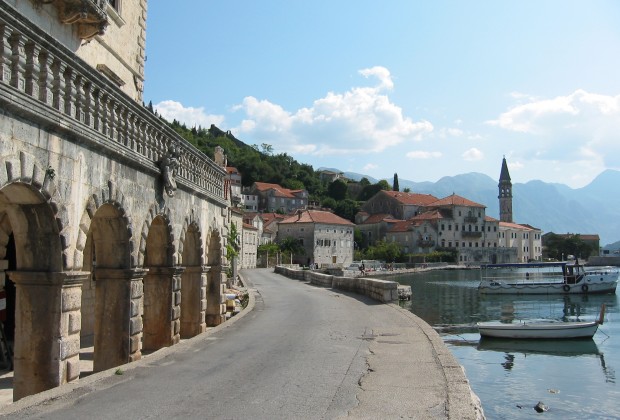 In 2005 I had an amazing opportunity to visit Montenegro and speak to musicians, club owners, media, law enforcement and government officials about intellectual property rights (IPR) and how they affect musicians in the United States (US). This trip was put together by the State Department and in particular T. J. Grubisha of the US Consulate in Montenegro. His colleague Sasa Brajovic was also a key figure in putting together this program. At first I questioned why they would want me to head these discussions but looking back on my history in the music industry, it made perfect sense. In 1999 I founded OnlineRock as a place for musicians to sell their music in a downloadable format. This was three years before Apple launched iTunes. It was also during the Napster pirating days which had a dramatic effect on my business model. Also, in 2004 OnlineRock released the Autumdivers’ second CD and four songs were illegally used by a major television network during a worldwide sporting event broadcast. Ironically they are also members of the Recording Industry Association of America (RIAA). I could put a face on this issue and, instead of getting a lawyer or another suit to present this information; T.J. had the vision to get real people involved. Aaron Boucher, the drummer of the Autumdivers also joined me during this trip.

Montenegro is a small country in south-eastern Europe. It has population of about 650,000. Its territory is approximately the size of the state of Connecticut. Montenegro was one of the six republics of the former Yugoslavia. The United Nations economic sanctions against Yugoslavia in 1992 damaged the Montenegro economy deeply, especially its tourist trade. In 2002, the Serbian and Montenegrin components of Yugoslavia began negotiations to forge a relationship. These talks became a reality in February 2003 when lawmakers restructured the country into a federation of two republics called Serbia and Montenegro. The Constitutional Charter of Serbia and Montenegro includes a provision that allows either republic to hold a referendum after three years that would allow for their independence from the state union. Independence appears to be a major goal of the current administration however many feel this will cause additional instability. Integration into the European Union (EU) and World Trade Organization (WTO) is another goal and although much of Montenegro’s economy is related to black market, piracy and cigarette smuggling, new laws have been adopted and will be put into place on January 1, 2005 that are geared to respect and enforce IPR.

In preparation for my trip I tried to learn as much about Montenegro as I could. I also took a look back at my career in the music industry to see what issues might be relevant and how these points could be presented. I studied US copyright laws and saw how they developed as technology evolved. I researched music industry groups and saw how their influence could be used to change both the laws in the US and the mentality of music consumers. I wanted to combine all of this information and present a clear, easy to understand message. I wasn’t a lawyer and didn’t think quoting laws or presenting industry numbers would have an impact. In addition, I wanted the people that I spoke with to walk away from these meetings thinking about this issue and what it meant to them. I posed the question; how important is creativity to your culture? 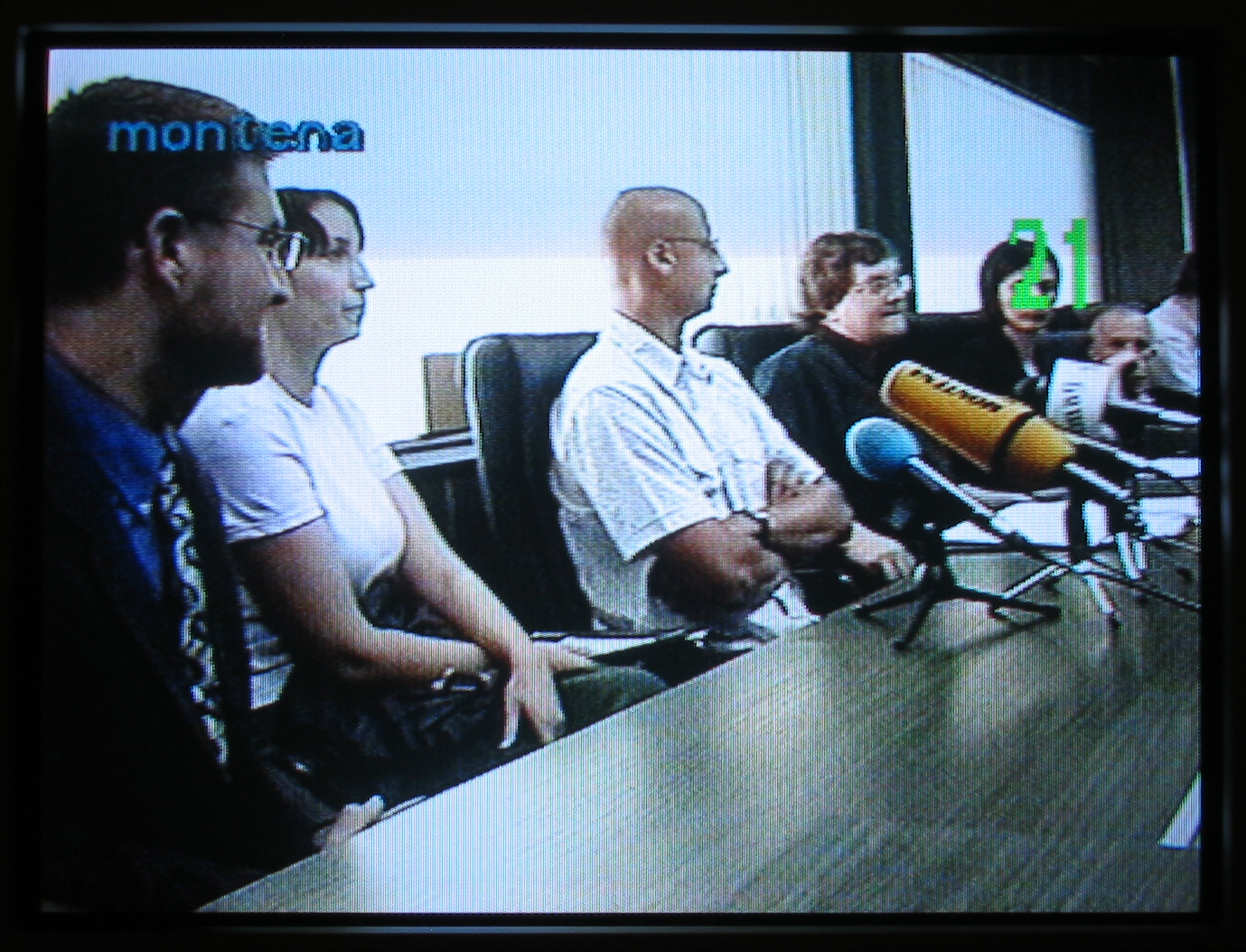 After arriving in Podgorica, the capital of Montenegro on Sunday afternoon, I settled easily into my hotel room, took a shower and decided to explore the city a bit. Everyone was extremely friendly and many spoke English which made getting around pretty easy. The downtown streets are filled with cafés where locals would drink coffee and people watch. Music filled the air as each café played CDs through powerful systems trying to attract patrons. Many had TVs which broadcasted soccer games. Basketball was also on the minds of everyone as the European Championship was being played in Podgorica however the Serbia and Montenegro team was eliminated later in the week. While walking the streets we stopped into a number of CD and DVD shops. Most all of these shops were stocked with blatantly pirated CDs selling for one or two euros each. Why would anyone pay 16 to 20 euros for a legitimate copy when these were so easily available? We could see the problem first hand.

We started off Monday with a visit to the US Consulate and were introduced to everyone who helped put this program together. After this briefing and understanding of how the week would go we headed out for our first meeting with Ljiljana Filipovic, the Deputy Minister of the Ministry for International Economic Relations and European Integration. She was extremely graceful and gave us a good background on why Montenegro was taking on IPR and what hurdles they needed to overcome. She made a point that Montenegrins were seen as being “lazy” and that change would be difficult. This is understandable when you look back at the history of the country where changes occur often and political stability is questionable. We also met with the Ministry of Culture and Media later in the day.

The next morning we met with the Broadcasting Agency of Montenegro. When we arrived at the Agency, we were escorted into a conference room full of people from television, newspapers and other people involved with the production of arts in Montenegro. Television and newspapers captured our opening statements as we introduced ourselves and our purpose. During this meeting, we heard from local artists who expressed their frustrations with the current system and described how at one time there was some sort of performing rights association and that radio and television stations had to report the music that they played over their station. The new law that will take affect on January 1 st, 2006 doesn’t mandate that and it seems that stations, both radio and television can still use music without the artists permission. Later that day we met with officials at then Cultural-Information Center to discuss our public meeting later in the week. At night almost every news station on the television covered the morning meeting in depth. 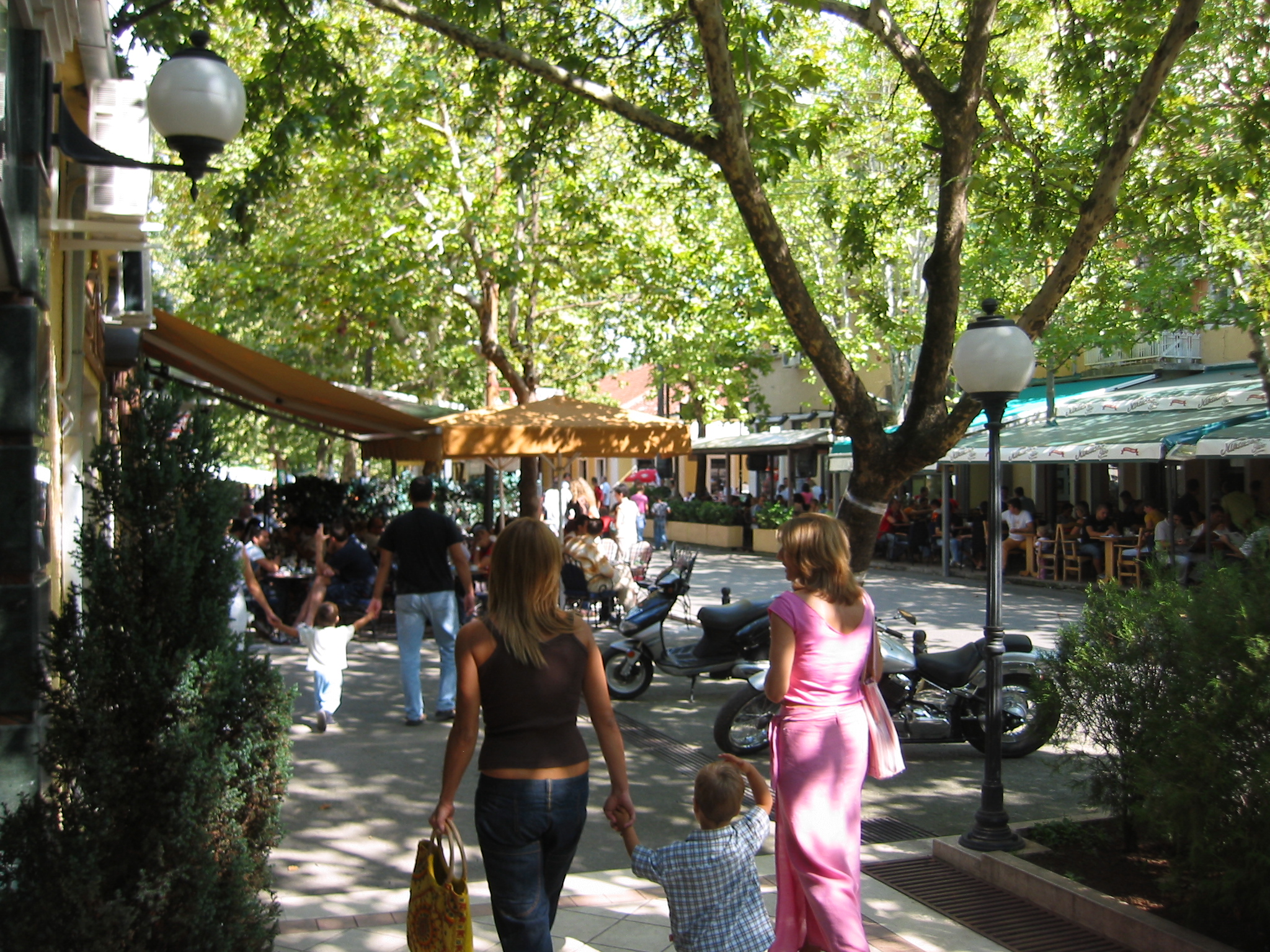 On Wednesday morning we met with government officials (Customs, Tourism, Culture/ Media, Police, Courts, European Integration) to discus U.S. legal frameworks and enforcement mechanisms. While there were a few people at the meeting that we met before, most were new and very attentive to what we had to say. After we presented our viewpoints and background, we opened this meeting up to discussion and had each of the people in attendance tell us who they were and what their background is on the subject. I felt that this was one of the most productive meetings we had during the trip and that everyone there was fully aware of the problem and wanted top help fix it but were concerned that they didn’t have the proper tools, manpower and laws to change things. They also felt that the mentality of all people involved with piracy issues would be hard to change.

Later on Wednesday we had what I feel was the least productive meeting. This was with club owners and although these guys were some of the nicest people we met, their views on the issues were skewed towards what would make their business more profitable (looking back that seems reasonable). They raised issues about what bands were charging them to have them perform music in their clubs. I personally felt that these were basic supply/demand business issues and we tried to explain that in the US, bands rarely get paid more than they are worth to that business. If the owner of the club wants to lose money on a band, that is their decision. 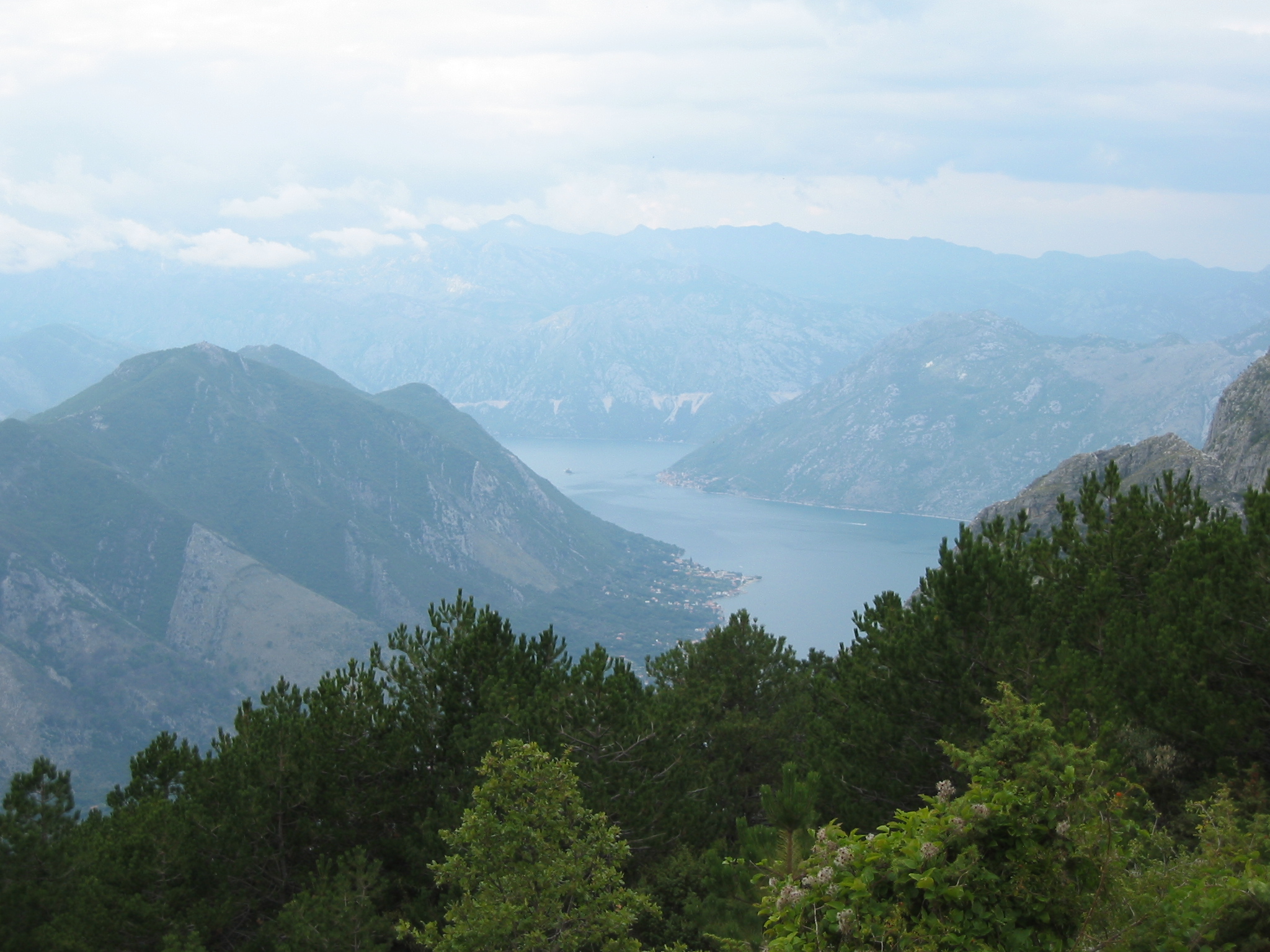 Thursday was probably our lightest day but one of our best. In the morning we met with a number of different journalists from a variety of publications. The main goal of these meeting was to publicize the public meeting on Friday however we were also able to share our stories and thoughts on IPR which hopefully, through the press, would reach a larger audience. The reporters that interviewed us asked great questions and I felt they understood why we were there.

On Thursday evening we had dinner with a number of Montenegro’s top musicians, composers and film directors at the Hotel Podgorica. I have to say that this was the highlight of the trip for me. The surroundings, the food and all of those present made this an unforgettable evening. A number of different topics were covered and both sides were curious as to how the other went about their business. Throughout the evening it seems as though everyone realized that they all would need to work together to help make Montenegro respect their rights as artists. I remember hearing one gentleman comment that even if it doesn’t help them directly, it will help artists in the future and make their country a better place. 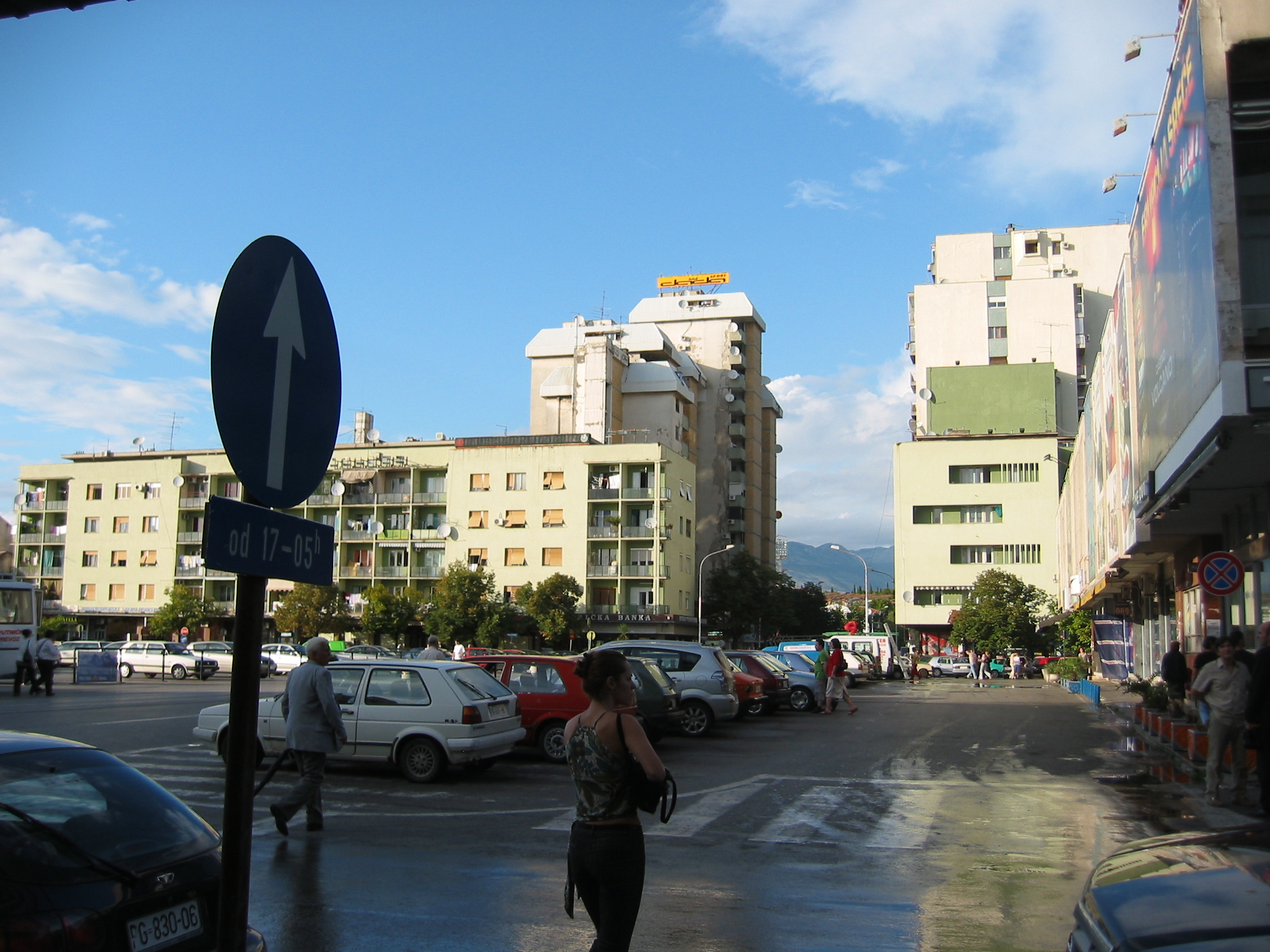 Friday was the last day of the speaker program and boy did the week go fast. In the morning Aaron and I split up to talk to two different groups. He spoke with musicians and performers and I talked with producers and promoters. There were also students in the audience. I felt there was great interest from the audience as usual but there was still the concern that nothing would be done about these issues. I couldn’t promise that anything would change but the fact that there is a new law going into place and that people were talking about it were all steps in the right direction.

Our last presentation was on Friday afternoon and this was open to the general public. After a week of press coverage we were hoping for a slightly larger audience but the people who came were very attentive and interested. There was one person who didn’t agree with our points on the subject and was a bit disruptive. Eventually he left and those who stuck around contributed to a very open discussion on IPR issues. There were a number of people from young kids just starting a band to producers that had a stable of acts who stuck around and talked more in depth even after the presentation was finished.

When I look back on the week of talks, I feel we did an amazing job putting a face on an issue that has a major affect on Montenegro’s culture. While our background is mainly in the music industry, all aspects of intellectual property are at risk if not protected. Film, software, clothing and medicine are but a few areas that need to be covered. It is said that every great journey starts with one footstep and I feel we helped put a few footsteps in motion.

This whole program would not have been possible without the help and knowledge of a number of different people whom I’d like to thank. From Barbara Durant who put together our travel accommodations to T.J. Grubisha and Sasa Brajovic who had the idea to make this happen in the first place. But most of all I’d like to thank the people and country of Montenegro, who welcomed us, heard what we had to say and exchanged views with us and were open to new ideas. I look forward to visiting you again.