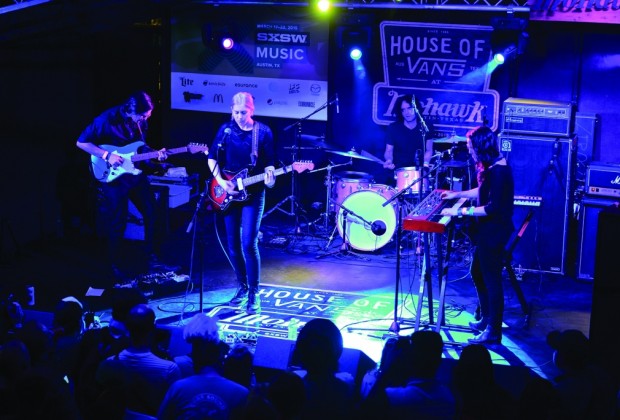 Each year over a thousand bands travel from around the world to Austin, Texas for the annual South by Southwest music conference. The shear number of artists make it hard to stand out at the festival let alone be remembered afterwards. I’ve been to SXSW eight of the last twelve years and while I can’t remember all of the acts that I’ve seen, some bands are more memorable than others. Obviously a great presentation of your art is the best way to be remembered but I tried to think back on why certain performances and bands stood out.

Here are five tips that might make your band become more memorable at and after South by Southwest. While these tips won’t work for everyone, they may give you an idea to try something new. Feel free to share your tips or ideas below.

Get Arrested – Ozalmatli was a band that I’d never heard of before. At SXSW 2004 they were all over the news after two of their members, along with their manger, got arrested for performing outside of a club where they were to play. The charges were eventually dropped but everyone seemed to be talking about the band over the next few days. If you have a few shows lined up, getting arrested might prevent you from playing. If that’s the case, have your manager get arrested. After all, that’s their job.

Play Roadie – The Rum Diary were performing at Maggie May’s one night and, after their set, had to move a lot of equipment quickly so that the next band could set-up. A friend and I carried some of their gear off stage. Pretty much every time I’d see them afterwards, they’d comment about that show. While this tip is geared towards having other bands remember you, you never know when you might want to set-up a show with them, have them appear on a recording, or even do a tour together.

Be Everywhere – Each year there is that band that plays fifteen shows in four days. You see and hear their name everywhere. Be that band! Line up as many shows as you can. Not only does it give everyone a chance to see you without interfering with the rest of their schedule, it also gets your name spread across websites, flyers and ads.

Give Something Away – Kitty Gordon was one of the first bands I saw at SXSW. After a strong set of female driven power-pop, they handed out a CDs to everyone in the crowd. Most bands have some extra CDs laying around and would be happy to share them with people who enjoy the music. If you have a new release, hand out a previous release with a sticker on it announcing the new one. Now not everyone wants a CD that they have to carry around so try a download card instead.

Business Cards/Bump App – After a performance, hopefully people will come up to you and ask how to get in touch. Business cards can still do the trick. You can create an inexpensive (even free) band business card and split them up between all of the band members. This way everyone has some. If you have an iPhone, set-up a contact for your band and use the Bump App. Over 75 million others have downloaded it and are using it as well.