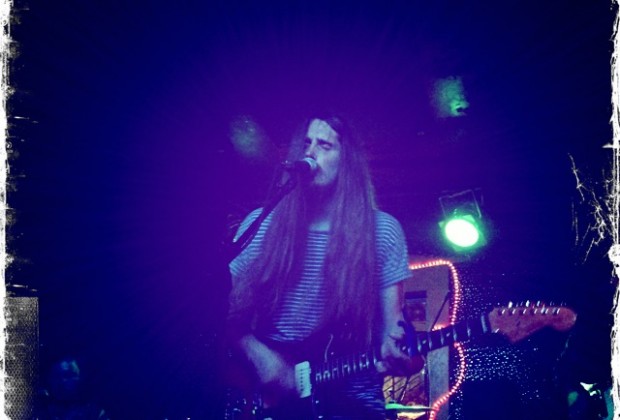 Florida-based band Roadkill Ghost Choir brought their brand of “indie folk” to the Bottom of the Hill in San Francisco last night. And while I’ve seen a number of reviews categorizing the band this way, I found their music to be way more powerful than that. With a six-piece band that includes a pedal steel guitar, banjo, and trumpet along with the usual guitar, bass, drums, and keys, Roadkill Ghost Choir’s full sound and dynamics filled the popular San Francisco venue more so then when I saw them at South by Southwest earlier this year. They will be on tour through mid-October including dates at the Austin City Music Festival.

The band’s Quiet Light EP, was re-released on July 9 via Wolfbomb Productions. The re-release features the five originally-released tracks as well as a newly recorded song “In The Lion’s Mouth.”

Absolute Punk said: “The power and grace showcased in just these songs is enough reason to think that this Florida band is just a few short steps away from making a masterwork.” Consequence of Sound added “Standout cuts like ‘Beggars’ Guild’ and ‘Drifter’ are driving folk numbers that showcase a taste for Wilco as well as Fleetwood Mac…you can just about feel Radiohead under “Devout”, a mark of Roadkill Ghost Choir’s impish edge with broad appeal.”

Roadkill Ghost Choir has been touring in support of the Quiet Light EP and recently came off a successful run of dates with Band of Horses, as well as festival appearances including Shaky Knees and Governors Ball. The upcoming tour dates find the band traveling all across the United States beginning in July, including a Los Angeles show at the Bootleg Theater on July 22 and appearances at multiple summer festivals along the route. For a full itinerary, please see below.

For more information about the band, please visit www.roadkillghostchoir.com