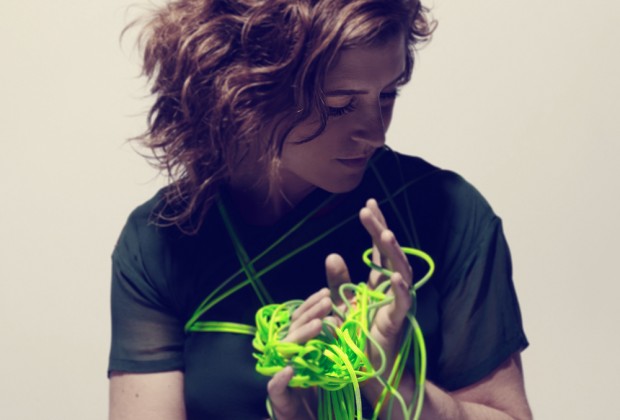 Uprooted from her home after a scorching break-up, Mirah spent four years rambling and recording. Tracks were laid down in almost two dozen houses and apartments — from the Northwest to Southern California to the East Coast. Sparse demos were recorded with co-producer Christopher Doulgeris in Portland and Los Angeles. Embellishments were then added by a slew of friends and collaborators, including Greg Saunier (Deerhoof), Mary Timony, Emily Wells, and Heather McEntire (Mount Moriah). In Philadelphia, Mirah and her sister Emily Zeitlyn (Divers) penned “LC,” an homage to childhood inspiration Leonard Cohen. Seattle-based composer Jherek Bischoff drew up intricate string arrangements which were recorded in the living rooms of each individual player. And Tune-Yards producer Eli Crews co-produced several tracks with Mirah in her new hometown of Brooklyn, New York.

As a lead-up to South by Southwest, The Noise Room is talking to bands and artists performing at SXSW. Here’s what Mirah had to say:

Where are you from and who are the members of your band?

Re-interpreting ‘from’. I currently live in Brooklyn. My band for this tour includes Alex Guy who lives in Seattle and Andrew Maguire and Daniel Fabricant who live in San Francisco. I’m not sure how to describe my sound. We’ll be playing guitars and bass guitars, violins and violas, drums and vibraphones, keyboards, and singing voices.

I try but social media doesn’t come all that naturally to me. For the month of February I pledged to tweet and/or Instagram at least once every day. It’s been feeling like a long month which is weird because it’s actually a short month. But it’s possible that some of my self-training worked and that if people follow me on Twitter, they might just continue to hear from me.

I’ve only been to SXSW once before. It was like traveling to a strange country with entirely unique and sometimes incomprehensible customs. I enjoy traveling very much and found the whole thing quite fascinating.

I’ll be releasing my new album Changing Light on May 13th on my own label, Absolute Magnitude Recordings. March is a little early to be touring for a May release but I’m so excited about the record I decided to do it anyways.

Well I wish I could go see St. Vincent but I think we’re playing at the same time. I think I’ll just magic 8 ball my time and find what I find.

Somewhere in the middle?