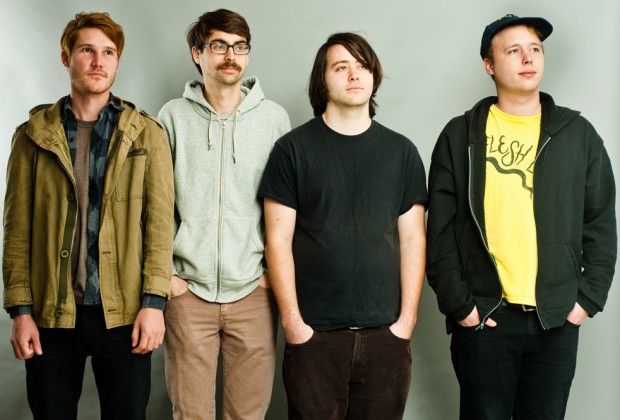 Ghetto Ghouls are a 4 piece punk band from Austin, TX. The name comes from a street gang that steals beer and beats up old ladies in the criminally underrated Vietnam-vet vigilante film “The Exterminator”. While not exactly a street gang by day, they are: a handy man, a college geography assistant, a sound guy, and a student. At night they wield the torch of sloppy 80’s noisy Texas punk like The Dicks, Stick Men with Ray Guns, and Scratch Acid.

As a lead-up to South by Southwest, The Noise Room is talking to bands and artists performing at SXSW. Here’s what Corey and Dan of Ghetto Ghouls had to say:

DAN: Getting to play with great bands from all over. And free stuff

Corey: Yeah, we have an album coming out in April. Its our first album and its being put out by Monofonus Press who’s also hosting the SXSW official show we are playing

Corey: Yeah, definitely that’s the great thing about South By is seeing as many good bands as you can. The Rebel, Yvette, Tyvek, Protomartyr, Spray Paint, Empty Markets, there are so many I want to see but I’ll spare you.

Corey:  Getting around places with your gear. Last year my car broke down in the middle of downtown while I was loading gear into a club. I had a friend help me get it into a parking lot across the street only to pay 40 bucks for a spot.

Dan: We kind of have a home field advantage being from Austin, so it’s not really challenging. We’re playing a show at Hotel Vegas at 2pm on Wednesday and then immediately after at 2:45pm at Beerland, so we’ll have to book it over there for that, but that’s part of the fun of it.

Dan: Rent a bike or something, driving/parking anywhere is impossible.

Corey: I like to stick around and check out the other bands.

Dan: Depends, Ian and Garrett work at Beerland, and Corey and I are there most nights of the week so that’s probably where we’ll be when we aren’t playing shows or at home. They have great bands playing every day of South By so it’s a good place to be.